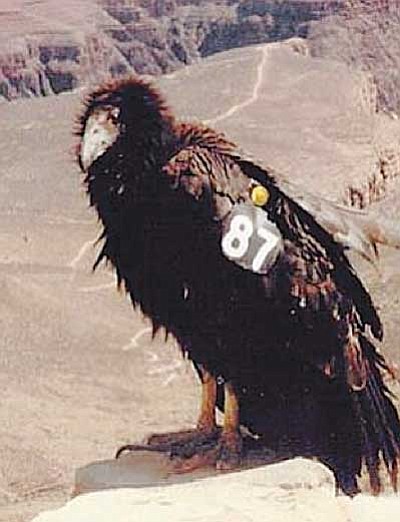 USF&WS/Courtesy photo<br> A young condor sits near the Grand Canyon.

Four endangered California condors will be released to the wild in the Vermilion Cliffs National Monument in northern Arizona at 11 a.m. Saturday.

The public is welcome to observe the release from a viewing area where spotting scopes will be set up, and experts will be available to answer questions.

To view the condor release, drive north on Highway 89 out of Flagstaff. Turn left (west) onto Highway 89A toward Jacob Lake and the North Rim of the Grand Canyon. Drive about 40 miles past Marble Canyon until you turn right onto House Rock Valley Road (BLM Road 1065). Travel about three miles to a shaded viewing area on the right. On top of the cliffs to your east will be the location where the condors are released.

Condors have been federally listed as endangered since 1967. The condor is the largest flying land bird in North America. The birds can weigh as much as 26 pounds and have a wingspan as long as 9.5 feet. Condors were first reintroduced in Arizona in 1996.

This will be the 16th public release of condors in Arizona since the recovery program began in 1996.

Condors are hatched and reared in captivity at The Peregrine Fund's World Center for Birds of Prey in Idaho, Oregon Zoo, Los Angeles Zoo and San Diego Wild Animal Park, then transported to Arizona for release to the wild.

"Previously, we held these public releases in March, but weather conditions and condor behavior make the fall a better time to celebrate the annual event," says Kathy Sullivan, condor program coordinator for the Arizona Game and Fish Department.

Condors were reduced to only 22 individuals in the 1980s when a program was started to save the species from extinction.

Now 73 condors are flying free in the Grand Canyon region alone. The world's total population of California condors is 384, with 186 of them gracing the skies of Arizona, Utah, California and Mexico.