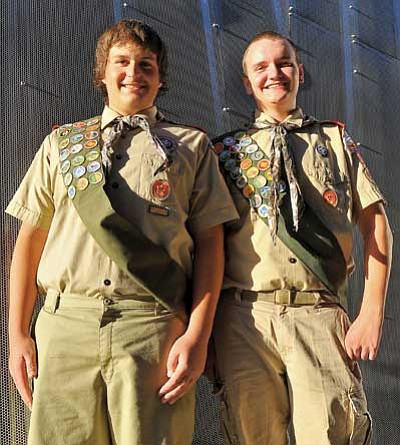 Matt Hinshaw/The Daily Courier<br> Boy Scouts Alex Theodoroff and Trenton Erickson both with Troop 57 will be receiving their Eagle Scout on October 2 at the Moose Lodge in Prescott Valley.

Trenton Erickson and Alex Theodoroff, both seniors at Bradshaw Mountain High School, completed projects to earn Eagle Scout badges, according to Scoutmaster Felicia Robinson. A ceremony to present the badges will take place at 1 p.m. Oct. 2 at the Moose Lodge here.

Trenton said he and troop and adult volunteers installed the studding (framing) and whiteboard walls for the center, which is 40 feet long.

Trenton, son of Diane and Kevin Erickson, said his project suits him because he is considering a law enforcement career. He is an Explorer with the Police Department.

Police Chief Jim Maxson conducted a tour of the commander center Thursday for the Town Council and staff.

He said Trenton has "done a wonderful job coordinating and bringing all the labor together to get it constructed."

Both Trenton and Alex have spent 10 years in scouting.

Alex, son of Peter and Janet Theodoroff of Prescott Valley, chose as his project to make 10 rocking chairs for the Prescott Valley Head Start program.

"We had the materials planned out already and it seemed like a good idea," Alex said.

Alex, 18, and his volunteers used half-inch-thick plywood. They sanded and painted the chairs as well.

The chairs are collapsible and can fit in a suitcase, Robinson said.

"I like them also too because they were painted in a variety of colors," Collier said.

The chair project sits well with Alex, who said he "felt compelled" to seek the Eagle badge because two other troop members - brothers Kyle and Kenny Lambert - earned the honor. He said he wants to work with his father in movie set construction at Universal Studios near Los Angeles after he graduates, and go into special effects.

Trenton said he sought the Eagle badge because it is "just something I have the opportunity to get."