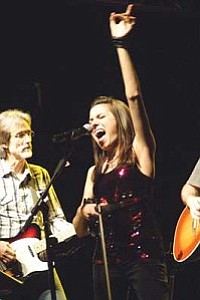 "I'm living my dream," Eason said from her Gilbert home. "I'm making a career out of something I love. This is my full-time job."

Although most venues advertise the Stephanie Eason Band as "country," that's a label that Eason says is a little misleading.

"We're a high energy fusion of bluegrass, modern country, rock and blues," she explained. "We cover the whole spectrum of music. We want to be different and reach out to a broader audience."

She started playing violin and piano in elementary school, and played in symphony orchestras and at church talent shows. Her music career took off in 2004 when she competed at Phoenix's "Gimme the Mike" contest.

"I was runner-up for first place," she said of her near victory at age 17. "I got a lot of exposure after that." She also formed her first band, Southeast and Latigo.

In 2005, country superstar Naomi Judd invited Eason to join her on stage at the Arizona Women's Expo. In 2007, she went on to perform in front of nearly 100,000 fans at one of the nation's largest country music events, Country Thunder USA.

Eason's off-the-wall brand of country music is what caused Hitson a year ago to travel from Prescott to Scottsdale to answer Eason's advertisement for a guitarist. His former band, Southbound, recently broke up and Eason was looking for work.

"I saw her ad on Craigslist," Hitson said. "It was the first and only time I've used Craigslist."

Eason's description of her music, and what she was looking for in a guitar player, caught Hitson's attention.

"She was looking for someone who wanted to break out of the usual country music mold," he said. "I decided to audition, but I told my wife that the last thing I wanted to do is play in a bar band in Phoenix."

He went to listen to Eason one night and was hooked.

"Hiring Stan has worked out beautifully," she said. "Stan rocks."

This past February, Eason and the band traveled to Nashville and recorded their first album, "The Red Letter Days," which includes 12 original songs written by Eason, Hitson and Galli.

"I always say the songs write me," Hitson said. "If I can get myself out of the way, the song is already there."

Eason and the band are not strangers to Prescott or Matt's Saloon - they play about once a month - but at the rate she is gaining notoriety, she may find herself making fewer trips to Whiskey Row. She already has opened concerts for some of the biggest names in country music: Clint Black, Randy Travis, Diamond Rio, and Naomi Judd, to name a few.

"We're putting all our efforts and energy into making this work," said Hitson, who logged 12,000 miles traveling to shows in the past year. "I describe our music as innocence and wisdom expressed as pure delight in the form of music. Steph has a lot of innocence in her and she's an attractive force for audiences."

Stephanie Eason performs Holdin' On live at the Scottsdale Studio.