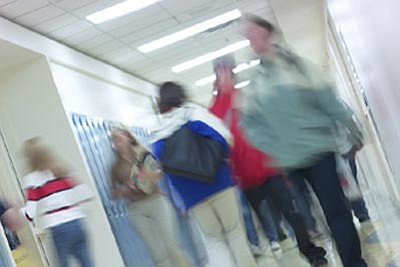 Student enrollment at all three local public school districts is down for the 2010-11 school year.

In the middle of the enrollment pack, Prescott Unified School District's student population is down 3.7 percent, closer to Chino's than Humboldt's.

The State of Arizona provides money to schools based on student enrollment, with the current year's enrollment figures to determine next year's allocation. If enrollment figures remain the same, the districts would have to cut their maintenance and operations budgets.

Officials at all three districts attribute the decline in enrollment to the economy.

HUSD spokesperson Mariela Bean reported that exit surveys "indicate that most people left because of the economy."

Superintendent Duane Noggle said despite the overall decline, enrollment at Chino Valley High School increased from 749 at the end of the 2009-10 school year to 794 on Aug. 26, a difference of 45 students.

"JTED (Joint Technology Education District) was also up, which is part of why CVHS was up," Noggle noted.

At Heritage Middle School, enrollment in the sixth, seventh and eighth grades went from 649 in 2009-10 to 597 for the current year - a decrease of 52 students.

"The economy is the major issue," Noggle said.

Chino Valley Unified will begin exit interviews this year. According to Noggle, kiosks will be available at each school and parents can visit the district website to complete a student exit survey.

Arizona is an open enrollment state, allowing parents to choose which school their children attend. Because of that, Noggle said CVUSD is "losing students to two charter schools - especially children living in Paulden. Still, a large percentage of our declining enrollment is families moving away."

Noggle remains optimistic. "There is not much we can do until the economy turns around. It'll come back," he predicts.

At PUSD, Finance Officer Renee Raskin reported a district-wide decline of 209 students on the 10th day of school.

However, that number includes the loss of 137 Northpoint Expeditionary Learning Academy students. Not counting NELA students, district enrollment dropped by 72 students. Enrollment at PUSD decreased from 5,635 students in 2009-10 to 5,426 for the current year.

According to PUSD Superintendent Dave Smucker, local districts are not alone when it comes to declining enrollment.

"Too many districts across the United States are not looking at enrollment numbers and how they translate into student programs," Smucker said. "We have to get real clever in the way we do things for kids."