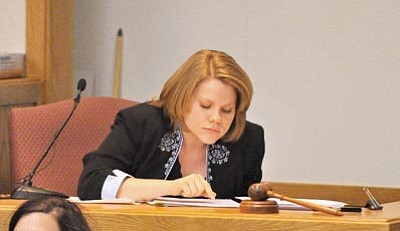 Matt Hinshaw/The Daily Courier<br> Alexis Brown, a DNA expert from Sorenson Forensics in Salt Lake City, looks through her notes while being cross-examined by a defense attorney Thursday afternoon at the Yavapai County Courthouse.

A DNA scientist who testified for the prosecution hit a home run for the defense in the murder trial for Steven DeMocker. The testimony that DeMocker's DNA was not found at the scene of his former wife's brutal slaying could have been a more ambiguous first-base single had an error not been caught.

The scientist, Alexis Brown, who works for Sorenson Forensics, a private laboratory in Salt Lake City where investigators in the July 2, 2008, bludgeoning death of Carol Kennedy sent some items for testing, spent a second day on the witness stand Thursday.

Brown told the jury that her lab found DNA from three men beneath the fingernails of Kennedy's left hand. The results excluded from the "major" profile both DeMocker and James Knapp, who had been Kennedy's tenant at the time of her death. However, in her first report, Brown said that one of two "minor" profiles was inconclusive concerning DeMocker. But it turned out that she had reversed Knapp's and DeMocker's names in her first report this past April and filed a corrected report after speaking with defense lawyers Larry Hammond and Anne Chapman.

"In the original report I transposed the two names," Brown said. As an explanation for the mistake, she said she had been rushed to produce the report.

"What would have happened if we didn't take the time?" Hammond asked Brown during cross-examination. Brown said that she didn't know but she reviews her reports before testifying.

As the first witness to testify about DNA in the trial, Brown was asked to explain how DNA works to the jury. Brown agreed that "DNA has become the gold standard for forensics." During Brown's testimony, a defense DNA expert sat in the courtroom taking notes and passing comments to the lawyers.

While no DNA evidence links DeMocker to crime scene, prosecutors have presented other evidence to the jury that they allege ties the Prescott stockbroker to the crime. Previously, a Department of Public Safety criminologist said that he could not rule out the possibility that bicycle tire tracks found near Kennedy's Williamson Valley house were made by DeMocker's bike. DeMocker told detectives that he'd been out riding trails near Granite Mountain at the time of Kennedy's death; however, no one saw him taking that ride. Deputy County Attorney Joseph C. Butner III plans to call an FBI shoeprint expert to give an opinion on prints found on a trail at the rear of Kennedy's Bridle Path house - prints that Butner said could have been made by La Sportiva shoes that DeMocker allegedly owned.

Knapp, meanwhile, one of Kennedy's friends, died of a gunshot wound in January 2009. The medical examiner ruled his death a suicide. Officials said that Knapp was babysitting at another location when Kennedy died.