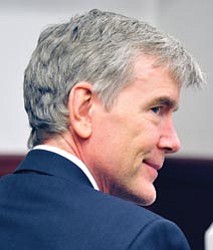 A scientist who works at a private laboratory testified Wednesday that Carol Kennedy had DNA from three unknown men underneath the fingernails of her left hand.

Alexis Brown, a supervisor at the Sorenson Forensic laboratory in Salt Lake City, Utah, told a jury in the murder trial for Kennedy's ex-husband, Steven DeMocker, that Kennedy also had DNA from three unknown males on her left hand itself.

In addition, Brown said, a cordless phone that her laboratory tested showed the DNA from three unidentified males. Tests found that the DNA had not come from DeMocker, she said.

Kennedy was talking to her mother on the phone in the evening of July 2, 2008, when she suddenly exclaimed, "Oh, no," and the call ended. Her mother, Ruth Kennedy, became alarmed when she could not then reach her daughter and eventually called the Yavapai County Sheriff's Office. A deputy looked into a window of Carol Kennedy's Williamson Valley home and saw her body on the floor of a room she used as an office. A cordless phone lay nearby.

Meanwhile, scientists at the laboratory also excluded James Knapp, a tenant who lived in Kennedy's guesthouse, from the major male DNA profile found under Kennedy's fingernails. And with the two minor profiles, "no meaningful comparison" to Knapp could be made.

The DNA sample on Kennedy's hand was so small that no comparisons could be made, Brown said.

Tests also excluded Knapp from the cell phone, she said.

Previously, Dr. Philip Keene, who performed the autopsy on Kennedy, said the nail clippers he used to clip her nails were pulled from a drawer and might not have been sterile.

DeMocker, who voluntarily gave a statement to detectives the night of his former wife's death, said that he had been riding his mountain bike on trails near Granite Mountain at the time of her death. He offered to give them blood and DNA samples.

Det. Luis Huante, one of the initial investigators, testified that DeMocker aroused his suspicions when he came to Kennedy's Bridal Path house that evening after his younger daughter told him that her mother died. DeMocker asked Huante if he was a suspect. Also, Huante noted scratches on DeMocker's arms and legs that DeMocker said came from bushes along the trail.

Also Wednesday, defense lawyer John Sears cross-examined Erin Daniel, a criminologist from the state Department of Public Safety, who began her testimony on Tuesday. Daniel came to the crime scene on July 3, 2008, to help the Yavapai Sheriff's Office by taking photographs and collecting fingerprints.

Daniel said that none of the fingerprints she found at the scene matched DeMocker's fingerprints. However, she found a thumbprint from Knapp on one of several papers stuck in a magazine left on Kennedy's kitchen counter.

Also, Sears showed Daniel a photograph that she'd taken of a spiral labyrinth made of large rocks in Kennedy's front yard. Questioned by Sears, Daniel agreed that hundreds of river rocks formed the labyrinth design.

Last week, a forensic anthropologist who said that a golf club might have caused the blows that crushed Kennedy's skull, named river rocks as another weapon that an assailant might possibly have used in response to one of Sears' queries.

Brown will continue her testimony when the trial resumes today. DeMocker, 56, who is charged with first-degree murder, remains in custody in lieu of $1 million. He could be sentenced to life in prison if convicted.