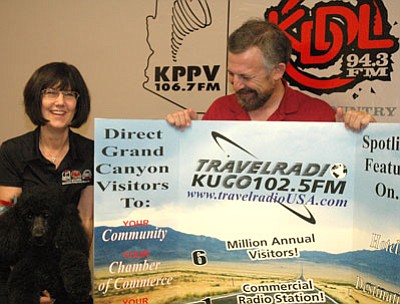 Terry and Sanford Cohen, along with their standard poodle, Diva, display a folding board advertising their newest venture, Travelradio, in front of the logos of Prescott Valley’s first radio station, KPPV, and the more recent KDDL.<br> TribPhoto/Cheryl Hartz

KPPV radio has been around for 25 years, but Sanford Cohen's interest in broadcasting dates 25 years before that.

"I used to listen to AM Top 40 radio (in bed) with a pillow speaker when I was 7 years old," Cohen said.

At age 8, he was writing his own hit guides, and by junior high, he was reading his school's morning announcements.

"Growing up in Detroit, home of Motown and Bob Seger, was every bit as creative as being in L.A. back then," Cohen said.

Cohen graduated from Michigan State University with an economics degree and went to work for a small radio station in Northern Michigan.

He spent the summer in Steamboat Springs, Colo., then moved on to Atlanta, Ga., where he worked at three radio stations before producing a Wall Street report on live TV.

He and Terry, who worked in advertising, met in Atlanta and married in 1981. They celebrated their 29th anniversary on Monday. They have a daughter in college, who plans to become a doctor, rather than take over the family broadcasting business.

Cohen said they were fortunate to get the permit to build Prescott Valley's first radio station.

"I can't tell you how amazing it was to go out to the car and turn on the radio and hear our own station playing," he said. "We were young and it was our first time in business together. We've experienced all kinds of discoveries along the way."

Although he admits he's not musically inclined (except for riffin' on the harmonica), Cohen said he always has enjoyed all different types of music - one of the reasons for launching additional stations.

In 1987, the Cohens moved the antenna to Glassford Hill and developed the first solar-powered FM radio station in the United States. That garnered them a slew of awards, including a special commendation from the U.S. Secretary of Energy, he said.

For six years, the station was strictly solar.

"Our intention was to broadcast to as wide of an audience as possible," Cohen said. "When the rules changed, we moved to a higher mountaintop."

That higher site is on Mount Francis southwest of Prescott. The solar antenna still operates as backup and a relay to pass the signal to other stations.

Cohen recounted how he entered the studio with a flashlight during a major power outage in 1988.

"For six hours we were the only radio station on the air," he said.

The Cohens considered using the Grand Canyon station to broadcast country music, but decided that wouldn't satisfy all of the area's listeners.

"What do they all have in common? They're all traveling," Cohen said.

An enthusiastic response to the idea of travel radio at a Triple A Travel Show in January sealed it.

"That was our in-depth research," Cohen joked.

Travelradio premiers this week and instead of 30-to-60-second commercials, features 5-minute mini-documentaries that repeat throughout the day.

Shorter versions of the documentaries stream on the home page Web site in German and Japanese, translated from English by local people.

It's all part of the Cohens' "Arizona First" strategy. "It gives us the ability to reach out to foreign visitors prior to them setting foot on American soil," Cohen said. "And we have this worldwide look coming out of Prescott Valley, Arizona. Good ideas can come from anywhere."

Terry Cohen, from upstate New York, said Prescott Valley has the same kind of feel as the small resort town she grew up in.

"We were happy to be able to come to a nice community like this," Terry said.

Sanford added, "We've grown right along with the community, from the two of us and one employee to 16 employees and five stations with seven frequencies and five Web sites, all running 24/7."

Terry noted the change in technology.

"We actually had turntables and reel-to-reels," she said.

The next 25 years undoubtedly will bring more technology, more surprises and more stations for the Cohens.