Trial on hold while DeMocker searches for new lawyer 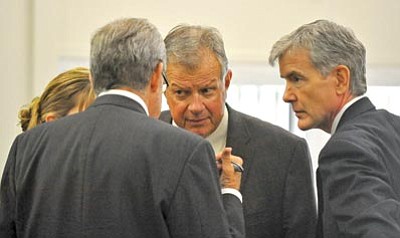 The Yavapai County Public Defender's Office so far has not located a defense lawyer able to represent DeMocker, the Prescott stockbroker being tried for first-degree murder in the July 2, 2008, death of his ex-wife.

DeMocker needs new counsel after his defense lawyers withdrew their services in the midst of the trial. The state Supreme Court gave defense lawyers John Sears, Larry Hammond and Anne Chapman permission to quit the trial this week.

DeMocker, 56, was accused of killing his ex-wife, Carol Kennedy, after a deputy found her bludgeoned body in a bedroom at her Williamson Valley home on July 2, 2008. Prosecutors allege DeMocker killed his former spouse for financial reasons, in part to avoid a $6,000 per month alimony bill.

However, no DNA or fingerprints link DeMocker to the crime scene and forensic scientists found DNA from three other men underneath the fingernails of the victim's left hand.

In a soft voice rife with emotion, Hammond spoke for the defense team Friday, expressing his regret at the turn of events, saying the attorneys decided to leave the trial for "ethical reasons." However, the rationale behind the unusual move by the defense remains confidential.

"We have expressed in this court our belief in this man's innocence of the killing of Carol Kennedy," Hammond said. "Nothing that is happening today changes or compromises our belief in his innocence or in his entitlement to a fair trial in which his innocence is presumed as required by our Constitution.... We all look forward to the day when we may stand together outside of this courthouse together with Mr. DeMocker."

In a written statement, DeMocker's family members, who did not come to court Friday, said they are "painfully disappointed by the recent events that have led to the withdrawal of his defense team at this critical time in his trial.

"We continue to believe in Steve's innocence and remain confident that he will be cleared of these charges and return to his family," the statement read.

DeMocker, meanwhile, also faces fraud charges related to an anonymous e-mail that his lawyers tried to introduce as evidence of third-party culpability. An investigation revealed that DeMocker allegedly orchestrated that e-mail, which was sent to Sears from an Internet café in Phoenix with the help of his teenage daughter, prosecutors said.

Dean Trebesh, the Yavapai County public defender, told Superior Court Judge Warren R. Darrow that he learned this week his office has conflicts and cannot represent DeMocker in either the murder case or the fraud case. While he appointed Craig Williams as DeMocker's lawyer in the fraud case, Trebesh said that so far he's been unable to find an attorney for the murder trial.

"I need someone appointed as soon as possible," Darrow said.

Meanwhile, the jury, which has waited for more than a month for the trial to resume, remains in place, Darrow said. He told the lawyers to return to court next Friday.

Hammond also asked Darrow to order that DeMocker be returned to the general population at the Yavapai County Jail where he remains in custody in lieu of $2 million bond.

Hammond said the Sheriff's Office placed DeMocker in administrative segregation or lockdown "as a result of matters that have nothing to do with why we're here today." That situation causes him "great concern" for DeMocker's health, Hammond said.

Deputy County Attorney Joseph C. Butner III responded that detention officers placed DeMocker in administrative segregation "because of his actions while in confinement."

DeMocker continues to have visitors, phone privileges and access to video-conferencing with his lawyers, Butner said.

Meanwhile, Darrow scheduled a Nov. 23 hearing for a motion brought by The Daily Courier to unseal documents in the case. Darrow noted that most sealed documents would be disclosed when the trial ends.

Asked after the proceeding whether a mistrial is likely because of the length of time it will take any new defense lawyer to become familiar with the reams of evidence in the case, Chief Deputy County Attorney Dennis McGrane said that it would be up to the new lawyer to "make that determination."

The trial, which began in May, broke off repeatedly for various reasons, including a serious illness that befell the first trial judge.