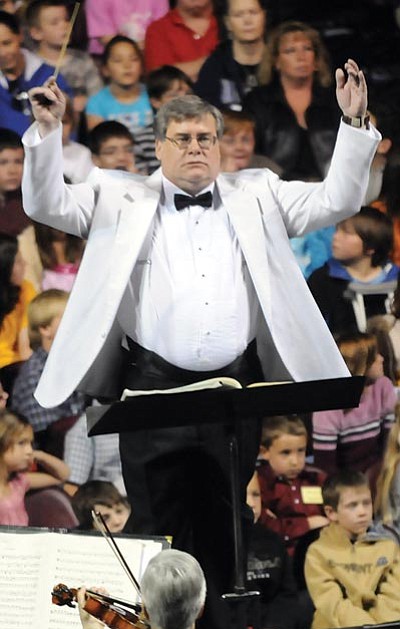 Prescott Valley resident Paul Manz, along with some musical friends, founded a community orchestra in Prescott in 1992 because he wanted a musical venue that would be fun for musicians and audiences alike. This week, Northern Arizona University will honor Manz for his contributions to what has evolved into the Prescott POPS Symphony, a group that not only is fun for 60 musicians of all ages, but that makes available crucial support for music programs to all area school districts.

Manz will receive the Jeff Ferris Volunteer of the Year award from the NAU Alumni Association today during NAU's Homecoming celebration in Flagstaff. NAU professor-administrator emeritus Ray Newton and his wife, Patty, an award-winning music teacher and musician, nominated Manz for the award.

"Paul Manz had true vision in founding a volunteer community orchestra that showcased the outstanding musical talents of its members," Newton said. "Better yet, he emphasized the inclusion of school-age musicians in the orchestra so that they would be challenged in performing high-quality music.

The cumulative result of that effort? Great "pops" concerts to entertain the community, and thousands of dollars, which then are returned to the schools as grants to support musical programs, or as scholarships to help students further their musical educations."

Manz is humble about what has become what he calls a "semi-professional" orchestra.

"So many people were involved - music lovers who wanted to see this happen," he said, including Ellen McGowan, the late Chris Myers, Phil Kuhns and Tara Sholle. McGowan and Kuhns are still regular members of the symphony, which includes all ages from students up to age 85.

Manz spent 10 years teaching music at the elementary level in the Prescott Unified School District. He has directed orchestra and band at Granite Mountain Middle School since 1992, and he served as adjunct instructor in band and orchestra at Yavapai College and Embry-Riddle Aeronautical University. But his middle school musicians are his passion, because he can specialize in orchestra and band.

"General music was too broad," he said of his elementary teaching years.

He maintains there is a direct correlation between children who learn music and who are successful in every other area of their lives.

"Music teaches discipline," he said. "Many of the best students are in music, some of the best scholars are also in band or orchestra."

Sometimes, finding they are good at music is just what some struggling students need.

"I've seen it a few times where music helps center a student. They can focus and it adds to their success," Manz said.

Manz also is passionate about involving the community in school music programs, and that's where the POPS Symphony comes in.

"The symphony works hard to promote the success of music in public schools.

"Last year we gave $15,000 to area music programs. It always goes to instrumental programs to support the public schools," he said. It is this community involvement that keeps the benefits of music education in the public eye, he said.

"If the music program becomes an integral part of the community, it becomes more difficult to make cuts," he said.

In March, the group will stage its fifth Music Memory concert, which draws nearly 4,500 local schoolchildren to Tim's Toyota Center in Prescott Valley. There, they find that classical music is pretty exciting after all. Manz said that is because they symphony makes it relevant to the kids.

"We play music they want to hear. We do music from the 'Pirates of the Caribbean' and 'Star Wars.' One year we played music from the 'Pink Panther' and I came out in a pink vest and a tail. The kids love that kind of stuff," he said. "We also try to feature a student soloist."

One year, the symphony played "Blue Danube", and student ballroom dancers in full garb stepped and twirled their way through the aisles.

"It's great," Manz said of the students. "They cheer and they love it. They're an awesome audience - so enthusiastic."

Many volunteers step in behind Manz to make the symphony and its mission of supporting public school music a success. "We have a great symphony board now with incredible volunteers. The whole symphony is a pyramid of volunteers," he said.

One of the ways the symphony raises money to donate to school music programs is through its public concerts. The group is planning a musical extravaganza on Sunday, Dec. 12, at the Yavapai College Performance Hall. The concert is titled "Merry Christmas and All That Jazz", and it will feature the Prescott POPS festival chorus and several guest conductors. The public can purchase tickets at the symphony website, www.prescottsymphony.com, or contact Yavapai College Community Events at 776-2000.