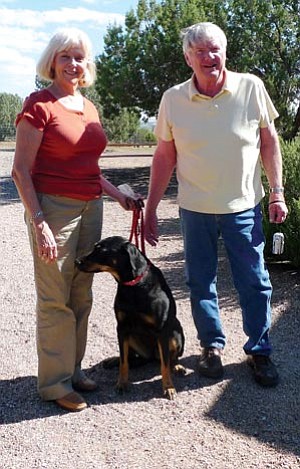 Courtesy photo<br> This is Xena and her new owners, the Nelsons. Xena was scheduled to be euthanized but was re-evaluated under the new YHS “No-Kill Ethic,” and received specialized behavior training at YHS. Xena is now happy at home!

There are moments on this job that make all the heartbreak and disappointment worthwhile. Recently Sandy Nelson, who had adopted one of our shelter animals a few months ago, called me to say, "Thank you for believing Xena (pronounced Zeena) deserved a chance to live." That was one of those moments.

When I first arrived at the Yavapai Humane Society (YHS) in July, I found Xena on the euthanasia list. Alone in her kennel, surrounded by barking dogs and abandoned by her family, she was understandably frightened. She responded to her new surroundings the only way she knew how - by demonstrating a behavior known as "fear-based aggression," which is not uncommon in shelter dogs when they first arrive.

Although we knew she was acting out her fear, her behavior was so fearsome that our most experienced animal handlers were unable to handle her. One of them admitted that, in all his years at YHS, Xena was the only dog that actually scared him. By the time I arrived that first week in July, it had already been determined that there was no chance Xena would ever be adopted. She was marked for euthanasia.

Public safety is the primary focus when evaluating dogs for adoption. With nearly 30 years experience in animal control and welfare, I understand better than most that there are dogs who are dangerously aggressive - dogs who should never be adopted out. Was Xena such a dog?

Imagine what must go on in the mind of a dog abandoned by her guardian. You wake up as you do every morning at the foot of your master's bed - but tonight you inexplicably find yourself alone in a cold concrete cell surrounded by excited barking dogs and strange people. Wouldn't you lash out in fear to defend yourself?

How do you discern a truly dangerous dog from an estranged pet?

Fortunately for Xena, renowned Malibu-based dog trainer and behaviorist Robert Cabral came to the rescue. Waiving his $250 per hour fee and all the expenses he incurred from driving himself and his two dogs, Silly and Goofy, to Prescott, he came to help staff and volunteers learn his life-saving techniques.

Cabral is not your typical dog trainer. His focus is not training beloved pets how to sit and stay in your backyard. His expertise is rehabilitating behaviorally challenged shelter dogs. He has been called upon to rehabilitate dogs adjudicated as "vicious" by city magistrates - dogs most of us wouldn't want to be in the same town with, much less on the same leash.

Believing that even these dogs deserve a chance at life is the essence of the no-kill ethic. These dogs do not come by this behavior naturally; they are trained directly or through neglect to be aggressive. The no-kill ethic asserts that every shelter animal deserves a chance at life. That means YHS will strive to treat animals in need of medical care as well as animals in need of behavioral rehabilitation in the effort to find each animal a loving home.

It was this ethic that saved Xena. The no-kill ethic created a way for the Nelsons and Xena to meet and fall in love. Today, Xena is in dog obedience classes, she happily sits for treats and she devotedly follows the Nelsons around their beautiful ranch in Chino Valley.

Cabral has a slogan: "You can't save all the dogs in the world, but you can save one. Join the revolution." Xena is one of many dogs benefiting from Cabral's life-saving training. YHS staff applied what we learned and Xena responded. She overcame her fear, was removed from the euthanasia list and was adopted by the Nelsons in July.

Isn't it time you joined the life-saving revolution? Adopt a shelter animal today.

For more information on Robert Cabral or the many wonderful pets available for adoption at YHS, visit www.yavapaihumane.org and click on the Black Belt Dog Training logo.

Ed Boks is the executive director of the Yavapai Humane Society. He can be reached at ed@edboks.com or by calling 445-2666, ext. 21.

The Big Fix
Quad-cities safest region in Arizona for homeless pets
Adopt-a-thon aims to get pets home for the holidays
Yavapai Humane Society STAR animals need your help
The effects of a no-kill ethic, by the numbers