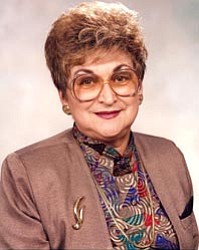 Dora, beloved wife of George, passed away suddenly in Caborca, Sonora, Mexico, while participating with George and members in the annual Prescott-Caborca Sister City Committee's visit to Caborca.

Dora was born in Los Angeles, Calif., and grew up in McFarland, near Bakersfield, Calif. She graduated from McFarland High School and obtained her bachelor's degree in business from Golden Gate University and her master's degree from Redlands University, both in Southern California. Over the years, Dora was employed by Terminal Rock and Sand of Little Rock, Calif., The Antelope Valley Press in Lancaster, Calif., where she was a photographer and assistant social club editor. She was employed by the National Aeronautics and Space Administration (NASA) Dryden Flight Research Center at Edwards Air Force Base, California, where she retired after a productive 25 years of service with the federal government. Dora had an illustrious career with NASA, rising from clerk typist in the human resources department to head of human resources (GS-14) department. Dora was especially proud of her lead role in the co-op program, which was the recruitment of college students to work at NASA Dryden, and was most proud of her lead role in the Federal Hispanic program.

During her career, Dora was active in many Hispanic organizations. She was a member and officer of Lulac, National Officer in Image (organization for Hispanic in government), was Hispanic program coordinator at NASA for 10 years, managed student programs where she recruited many Hispanic students for NASA, and provided counseling to Hispanic students as well. She also tutored adult Hispanics in English under the literacy program.

Dora and George lived for over 43 years in California's Antelope Valley, where Dora was also very active in several women's organizations. Among these organizations were the Palmdale Junior Women's Club, the Business and Professional Women's Organization (BPW) and the American Association of University Women.

After retirement, George and Dora moved to the Prescott Country Club in Dewey, Ariz., where she became involved in a variety of social activities, primary of which were the Prescott-Caborca (Mexico) and Prescott Suchitoto (El Salvador) Sister City Committees. For over 10 years, Dora served these committees as an officer or chairperson, with her greatest achievement coming from the creation and development of the very successful annual auction for each committee. Because of Dora's dedication and hard work, both organizations continue to thrive; her organization skills and leadership will be missed. Most recently, Dora volunteered time at the Arizona Attorney Generals Satellite office in Prescott Valley.

A church service for friends and family will be 10 a.m. Thursday, Oct. 28, 2010, at St. Germaine's Catholic Church, 7997 E. Dana Drive, Prescott Valley. In lieu of flowers, the family suggests a small donation to the American Diabetes Association of America.

Dora was a special and precious person who will be missed very much by her family and friends.