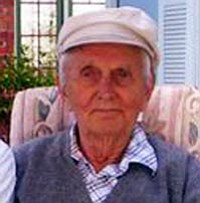 Donald DeWitt Clark, 96, devoted husband, father, grandfather and great-grandfather, peacefully passed away Oct. 23, 2010, in Prescott, Ariz. His family was at his bedside.

Donald, one of three sons, was born at home on the family farm March 31, 1914, to John and Belle Clark in Waltham, Vt.

He is survived by his loving wife of 73 years, Martha Weddell Clark. They met at a First Congregational Church supper when Martha was 16 and Donald was 17. Martha looked across the room, saw Donald, and told her sister Connie, "That is the man I am going to marry," and they did get married seven years later.

After Donald and Martha married, they moved to his parents' farm in Waltham and lived in an apartment upstairs. Not too long after, they bought the old farm and raised seven children there. They had almost 500 acres of beautiful Vermont farmland bordering on Otter Creek.

He became a licensed pilot in 1939 and would scrunch his toddler sons, DeWitt and Rodney, into the seat next to him and take them flying. Those were the days when an airport was a grass field long enough to take off and land. Donald loved flying and took to the air as often as he could.

Donald was a very innovative and forward-thinking man. He shunned farming chemicals and became one of the pioneering organic farmers in the late 1940s. He took pride in his organic apple orchard and showed anyone who was interested the beautiful soil he had nurtured with the bountiful manure from his 150 dairy cows.

In the early 1950s, Donald was one of the first Vermont farmers to abandon the traditional way of milking cows and installed a Surge milking parlor, where Donald and his hired men milked the cows from a standing position in a pit.

In 1958, Donald and Martha sold the family farm and Donald went into real estate with his brother Allen in Vergennes, Vt. In 1967, they moved to Prescott, Ariz., where Donald continued his real estate career. He owned Don Clark Realty (Realty World) until he retired in 1987 and was president of the Prescott Board of Realtors in 1971.

A special note: The only other surviving family member of Donald and Martha's generation is Ailene Weddell of Ferrisburg, Vt., who was married to Martha's late brother, Robert.

Donald was predeceased by his brothers, Allen Parker Clark of Vergennes and Panton, Vt., and John Wellington Clark of Shelburne and Vergennes, Vt.

Donald, a lifelong Congregationalist, was a member of the First Congregational Church of Vergennes and Prescott after moving there. He had a strong faith in God and will be remembered as a kind and gentle man with a great sense of humor.

There will be a private, graveside service at Mt. View Cemetery, Prescott, officiated by Donald's son Brian.