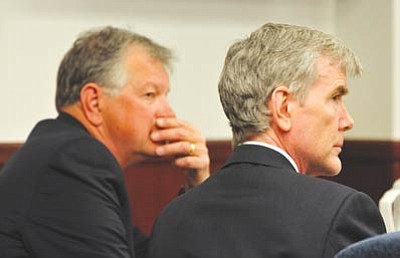 Originally Published: October 26, 2010 5:26 p.m.
Tweet
In a surprising turn of events, the state Supreme Court ruled Tuesday that defense lawyers for murder defendant Steven DeMocker can quit in the midst of his trial.The decision will likely result in a mistrial, requiring that a new trial be scheduled. Meanwhile, court officials told the jury to contact the jury commissioner today for further instructions.Richard Robertson, a spokesman for the DeMocker defense team, said, "We just received this and have to sort out what it all means." He declined to comment further.The trial, which began with jury selection on May 4, has been fraught with delays, including a five-week break beginning in June when Superior Court Judge Thomas Lindberg suffered a serious illness. Other delays occurred as lawyers battled over various legal issues out of earshot of the jury and often behind doors closed to the public.DeMocker, 56, a Prescott stockbroker, was accused of murder in the July 2, 2008, bludgeoning death of his former wife, Carol Kennedy. Kennedy, 53, died of blows to her head that authorities believe could have been inflicted with a golf club. A sheriff's deputy discovered her body in a back bedroom of her Williamson Valley home. Prosecutors cite financial reasons, including a $6,000-per-month alimony payment, as the motive for the crime.The Supreme Court ruled that defense lawyers John Sears and Larry Hammond could withdraw from the case because of a "nonwaivable conflict of interest."In its ruling, the high court noted that "the state concedes that defense counsel's avowals should not be taken lightly and acknowledges that, based on a reasonable interpretation of the facts, the state agrees that such a conflict may exist.""Given the state's concession, we conclude that defense counsel should be permitted to withdraw," the court wrote.Lawyers filed many of the documents in the case under seal, including the defense counsel's motion to withdraw, and numerous hearings took place behind closed doors. Meanwhile, lawyers for Western News&Info Inc., the parent company of The Daily Courier, filed a petition with the court asking that the records be made public. Citing his right to a fair trial, DeMocker's defense attorneys opposed the paper's request."I've not seen the order but if any records were sealed that relate to the order, access to the records will help the public understand what has transpired in this murder case," said Peter Kozinets, a lawyer with Steptoe & Johnson, a Phoenix firm that represents The Daily Courier.The level of secrecy ramped up when the Yavapai County Attorney's Office revealed that DeMocker allegedly had his teenage daughter, Charlotte, now 18, send an anonymous e-mail from an Internet café in Phoenix in July 2009. The e-mail went to Sears but the sender had an incorrect address for Deputy County Attorney Joseph C. Butner III.The e-mail described a team of hit men sent from a prescription drug ring to kill Kennedy's tenant, James Knapp. Knapp, who was away babysitting the night Kennedy died, was taking prescription drugs for cancer. He later died of a gunshot wound and his death was ruled a suicide.Prior to the charges that DeMocker authored the e-mail, defense lawyer John Sears sought to have the e-mail admitted as evidence at the trial because it could cast the blame for Kennedy's death on others. Butner, however, disagreed. Once DeMocker's alleged role came to light, the defense tried to exclude the missive, while Butner, who added fraud charges to the accusations leveled against DeMocker, wanted the jury to see it.Chief Deputy County Attorney Dennis McGrane declined to comment about the Supreme Court ruling. Yavapai County Presiding Superior Court Judge Robert M. Brutinel also declined to comment since the case remains pending. Previously, Brutinel and the Appellate Division ruled that the defense lawyers must continue to represent DeMocker.Janice DeMocker, DeMocker's mother, and Ruth Kennedy, Carol Kennedy's mom, also declined to comment for this article.DeMocker, who remains in custody in lieu of $2 million, could face life in prison if convicted.ORIGINAL REPORT, 5:26 p.m.The state Supreme Court ruled Tuesday that lawyers for murder defendant Steven DeMocker can withdraw from the trial, which began with jury selection on May 4.DeMocker, 56, a Prescott stockbroker, stands accused of murder in the bludgeoning death of his wife, Carol Kennedy. Kennedy died on July 2, 2008, in her Williamson Valley home. Prosecutors claim that DeMocker, who agreed to pay her $6,000 per month in alimony, had a financial motive for the crime.In its terse ruling, the high court found that defense lawyers John Sears, Larry Hammond and Anne Chapman have "a nonwaivable conflict of interest and should be permitted to withdraw as counsel."The decision will likely result in a mistrial.
Contact
Sign up for Courier e-News Alerts
Most Read
7 days
30 days