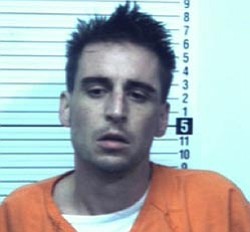 Following a seven-hour ordeal, the Prescott police SWAT team late Friday night arrested a 39-year-old man who officers believe burglarized an apartment in the same complex where he had been living on the city's east side.

Police did not arrest the suspect, Eric Noury, until 10:35 p.m. Friday, hours after the man had allegedly refused to leave his own apartment at 149 S. Virginia St. Officers say they had to use tear gas and a canine to remove him from the building.

He is being held on a $10,000 bond pending a court appearance next Thursday in Superior Court.

At about 3:30 p.m. Friday, police say they first responded to a burglary in progress at the apartment complex.

The burglary victims were not at their apartment when the crime occurred. However, when they returned, they noticed that their glass arcadia door had been shattered, officers say.

Police were told that while the family was looking over the broken door, the suspect apparently ran out of the victims' apartment without taking anything and rushed into his own apartment in the same complex and locked the door.

Officers added that they later saw the suspect inside his apartment, but that he refused to answer the door or talk to them.

After conducting a background check on Noury, police say they found that the suspect has an extensive criminal history and obtained a search warrant for his arrest.

Officers eventually called in their department's SWAT team to negotiate with the suspect to leave his apartment.

But when this didn't work, police say, SWAT deployed tear gas into the residence, at which time a relative of the suspect, identified as 36-year old Tara Lynn Noury, left the apartment and was arrested.

Later, with assistance from a canine, the SWAT team eventually entered the apartment and arrested the suspect at about 10:35 p.m., officers added.