Editorial: Courier editorial board weighs in on propositions 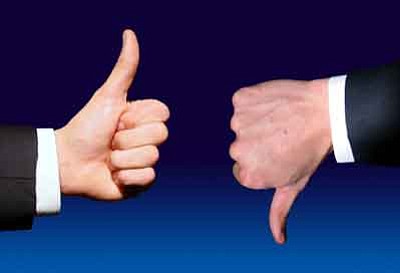 As voters work to complete their mail-in ballots (you have only until Thursday if you want the mailman to deliver it) or prepare to go to the polls in nine days, The Daily Courier Editorial Board is making its General Election recommendations.

Today, we offer our picks on the ballot measures; later this week we will publish the results of our candidate endorsement interviews in two parts - partisan races and area school boards.

The Daily Courier recommendations are as follows:

• Proposition 106 - Health care - Prohibit rules against participation in specific health care: Though we do not like a constitutional amendment that seems political, we believe "choice" is important. This one deserves a "yes" vote.

• Proposition 107 - Affirmative action - Ban preferential acceptance to employment: Affirmative action was necessary in the 1960s. It should not be needed today, but discrimination still exists. We're voting "no" on this measure.

• Proposition 109 - Hunting - Would give a constitutional protection to the right to hunt in Arizona: The current hunting rules and regulations, though not perfect, are better than this step in the wrong direction. We're calling for a "no" on this one.

• Proposition 110 - Natural resources - Authorizes exchange of state trust lands in order to protect military installations: We don't have a problem with this; vote "yes."

• Proposition 111 - Administration of government - Re-name the position of Secretary of State to Lieutenant Governor: This would require the candidates for Governor and Lieutenant Governor to run on a ticket, like President and Vice President. It would put a stop to surprise successors. This deserves a "yes" vote.

• Proposition 113 - Labor - Extend the right of Arizonans to use a secret ballot in union elections: This would get rid of petitions and guarantee the right to secret ballots. "Yes" on 113.

• Proposition 203 - Marijuana - Legalization of medical marijuana: This measure comes down to a key word - "medical." We're not going to stand in the way of patients' needs such as those with cancer. This proposition gets a "yes" vote.

• Proposition 301 - State budgets - Transfer money from a land-conservation fund to the general fund: When weighing needs and wants, we see the state budget needing more help right now. A "yes" vote is called for here.

• Proposition 302 - State budgets - Measure to repeal First Things First education program: This involves children, especially those at risk and those from low-income families. We're not going to take food out of their mouths or stop giving them a hand up. We're voting "no" on this one.

• Proposition 402 - Giving the city "all powers" to operate a waste collection system: The city does not need to have a trash monopoly. This deserves a "no" vote.

• Proposition 403 - Requiring candidates to be a "qualified elector" of the city for one year prior to the primary election: A "Yes" vote makes sense.

• Proposition 405 - Give the City Clerk authority to verify that candidates are qualified electors of the city for one year prior to the primary election; remove signatures of those signers on petitions who list an address outside the city limits; and remove signatures of those who signed before the statement of organization or exemption was filed: This should have been happening all along. "Yes," please.

• Proposition 406 - To be consistent with state law, have the city's primary election take place in the fall of every odd-numbered year, rather than September: "Yes."

• Proposition 407 - Clarify that winners of the primary must receive a majority of all "valid ballots" cast, rather than "votes" cast: "Yes."

• Proposition 409 - Clear up ambiguity in the city code regarding elections for approval of franchises: "Yes."

However people vote is their business, and The Daily Courier encourages every registered voter to go the polls and make their voices heard.

For more information on these ballot measures, visit dCourier.com and click on the "Elections" link under Latest News.

City propositions aim to clear up election issues
PRESCOTT CITY COUNCIL ELECTION: Time is running out to vote in primary
Editorial: Courier lists picks for General Election
Propositions: What they are and what they'll do
City voters approve all eight charter amendments