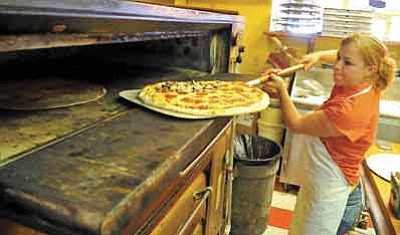 Matt Hinshaw/The Daily Courier<br>Ashlee Elkins, manager of Bill’s Pizza, pulls a pizza out of the oven Tuesday afternoon in Prescott.

The favorable reviews continue to roll in about as frequently as Bill Tracy's staff rolls out its dough.

The latest badge of honor for Tracy, owner of Bill's Pizza, at 107 S. Cortez St., is making the list of Popular Plates magazine's list of "100+ Can't-Miss Pizzerias."

The coast-to-coast guide highlights restaurants where customers can "savor the magnificent multiple personalities" of pizza joints from California to Connecticut.

"This is pretty amazing," he said. "We're right up there with the best of the best."

Tracy's restaurant is one of four Arizona pizzerias and one of 25 in the West to make the list.

Tracy never gave such an honor a thought back in the 1980s when he began forming the idea to start his own pizzeria.

He sold The Dinner Bell back in 2004 and moved to Oaxaca, Mexico, for a year, where he said he worked with chef Susana Trilling.

Tracy moved to Prescott permanently in mid-2005 to help care for his mother and opened his pizzeria in early spring 2007.

The rest is really the extra topping on the pie for Tracy, whose menu features a mix of salads, beverages and a diverse selection of pizzas.

Tracy offers nearly 40 different toppings ranging from jalapeno slices and zucchini to roasted eggplant, meatballs and fresh or cooked spinach, with all of the other usual topping options to boot.

Sauces include pesto, alfredo, Thai, olive oil and garlic and a mix of pesto and red sauce.

For people who can't make up their minds, the menu lists nearly 25 pizzas with an array of combinations like the Elton John, with roasted garlic infused with olive oil, artichoke hearts, tomatoes, cooked spinach, red onions and four cheeses plus feta (so named because one of the flamboyant singer's songs was playing when it was invented), to the chicken alfredo pizza with the sauce, roasted garlic, red onions, asiago and mozzarella cheeses and parsley.

Tracy's pizza prices start at $2.50 for a slice with cheese to 10-inch pizzas starting at $6 and 18-inch pies with seven toppings going for $20.

Many of Tracy's patrons keep coming back for more.

Sherry Agosti said the great taste and low prices lure her back to the pizzeria a couple of times each month for salad and a slice of specialty or cheese pizza.

"In this economy, you need a great price, and their food is excellent," she said.

Anne Richey knows a thing or two about pizza because she said her husband, Eric, was in the pizza business for roughly 25 years and they ran a pizzeria in eastern Michigan for about three years.

For information, call 443-0800 or visit www.billspizzaprescott.com.

Bill's Pizza gets a slice of victory at expo
Chew on this: Bill's Pizza thrives on decades of experience
Foodie Review: Rosa's Pizzeria does not disappoint
Dough is key to good pizza
The Bistro provides unique gourmet pizza experience