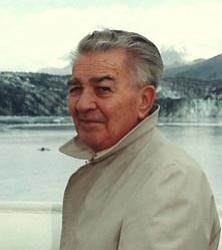 Joe Bailey Stanley was born May 12, 1911 in Mt. Selman, Texas to Solon and Gertrude Stanley. Joe passed from this life on Oct. 8, 2010 at Good Samaritan nursing home in Prescott Valley, Ariz.

Joe grew up on his family's farm in Texas, his dad farmed and his mother taught school. He attended elementary and high school in Texas graduating high school in 1929. He completed his education at North Texas Agricultural College. He began his lifelong love of power plants when he gained employment at West Texas Utilities Company at their Lake Pauline power plant in Quanah, Texas. One year later he married Floy Green.

In 1944, Joe and Floy relocated to San Diego, Calif. in anticipation of him being drafted into the U.S. Navy. While awaiting induction, the draft age was changed to 32, rendering him ineligible. When World War II ended he heeded a call from his old boss from Lake Pauline and relocated to Morenci, Ariz., taking a position as shift foreman at the Phelps Dodge power plant. In 1948, he was promoted to assistant superintendent and in 1953 to superintendent, a position he had until his retirement in 1976.

Upon his retirement, Joe and Floy moved to Carlsbad, Calif. Floy passed away one year later.

Joe was a good man who lived his life with honor. He will be missed by those who loved and cherished him.