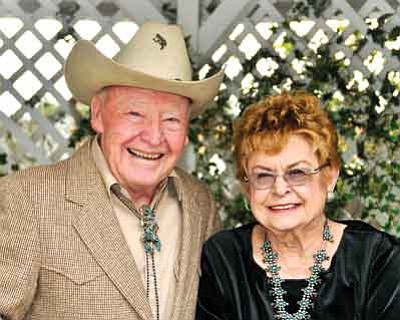 George (Telephone) and Patricia (O'Shea) Hill celebrated their 60th wedding anniversary of Dec. 2, 2010, on the weekend of Nov. 28. George and Pat, third generation Prescottonians, became sweethearts while attending Prescott High School. They were the guests of honor at a party hosted by their sons George (Kathy Bryson) and Chris (Brenda Campbell) at the Hassayampa Inn. Over 80 guests attended, some coming from as far away as Massachusetts.

George, in his early years worked for Mountain Bell and retired from that organization with over 33 years of service. Patricia worked for the Prescott Unified School District, Lee Optical and Geiler Optometry before retiring. In addition to their sons, they have five grandchildren, Brian, Casey, Garrett, Jenna and Mark; and five great grandchildren, Jake, Josh, Brady, Gabrille and Alyssa.

George and Pat have passed down through their lives their blessings and sharings with their family and many friends. The respect and love they have for each other is reflected upon all of whom they have touched over the years.