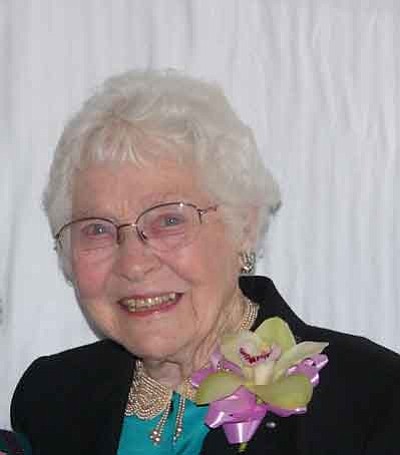 Lee grew up in Pine City, Minn., where she attended high school and one year of teacher training. She taught in one-room rural schools for six years. She married Raymond Erickson on Oct. 11, 1941, and worked in Oregon Shipyard during the war. Their son, Steven Erickson, was born in 1946.

In 1952, Lee and Ray moved to Ray, Ariz., where she helped run a family business, served as president of the PTA and was active in the Ray Baptist Church. Their daughter, Diane Robinson, was born in Ray in 1954.

The family moved to Prescott in 1960 where they were members of the First Baptist Church. Lee taught the beginners class for many years, and later led the girls' AWANA program. She was influential in starting weekly adult Bible study courses and served as president of her Sunday School class. She was involved in the formation of a widow's group that came to be known as the "Merry Widows" and enjoyed frequent luncheons, parties and travel with the group over many years. Later in life, she "adopted" two families in her church and thoroughly enjoyed fellowshipping with them.

Lee served as a volunteer at Sharlot Hall Museum and at the Samaritan Village retirement center. She also worked as a medical secretary for nearly 20 years. Her special interests were bird-watching, photography and traveling, including multiple international destinations.

Lee is survived by her children, Steven and his wife Linda, who reside in Virginia; Diane and her husband Dave Robinson, who reside in Wickenburg; four grandchildren, Todd Erickson, Joel Erickson, Eben Robinson and Suzanne Enlund; and seven great-grandchildren, Damien and Alyssa Erickson, Quinn and Mason Erickson, Laura, Emma and Caleb Robinson); her sister Doris Lindsey in Sun City West, Ariz., and her sister-in-law Alice Johnson in Denver, Colo., as well as several nieces and nephews. She was preceded in death by her husband, Raymond, her brother Harold Johnson, and her sister Ramona Quinn.

Internment will be at Mountain View Cemetery, Prescott, Ariz.

The family suggests contributions in lieu of flowers be made to First Baptist Church, P.O. Box 226, Prescott, AZ 86302, or to the Gideon Society.