20 veterans honored for their service at Prescott center 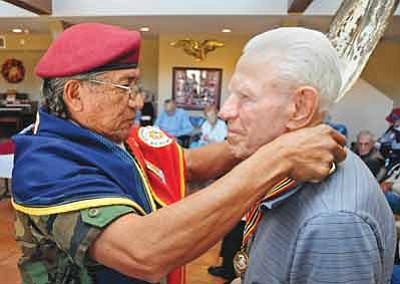 Brett Soldwedel/The Daily Courier<br>Lee Done (above) and Jerry Chatterdon (below) are two of several veterans that received the Warriors Medal of Valor from the Military Order of the Purple Heart Chapter 608 representative Tony Largo on Thursday at Peridot Retirement and Assisted Living.

Twenty veterans received the Warriors Medal of Valor Thursday afternoon from the Military Order of the Purple Heart Chapter 608 at the Peridot Retirement and Assisted Living Center in Prescott.

Before the ceremony, Bob Ketcham, 93, a U.S. Army veteran talked about how greatly outnumbered they were in the Battle of the Bulge during World War II.

"I was only in one battle. I admire people who were in many battles," Ketcham said.

After the battle, Ketcham said the group he was with was surrounded by Germans and an American lieutenant surrendered.

"If he hadn't, we'd have been dead," said Ketcham, who became a prisoner of war and made a long march through Germany to the Polish border.

"The German guards in the prison camp were as hungry as we were," Ketcham said. "All of us were down to 100 pounds. We only had a half cup of thinned down soup and a slice of bread to eat each day."

After five months of being a POW, the Russians came to liberate the camp and Ketcham said he went with them.

"We reached the River Elbe where the Russians shot mortars in the river to bring up enough fish for us to eat," Ketcham said. "When I looked across the river, I saw Americans and yelled 'Americanski' and that was the initial meeting of the American and Russian troops."

As the ceremony began, USMC Sgt. (Ret.) Alfonso Santillan Jr. described how Marshall Tall Eagle Serna designed the Warriors Medal of Valor to honor veterans who served in peacetime and wartime and show appreciation for their sacrifices.

The front of the medal shows the head of an eagle with an American flag in the background and two eagle feathers at the bottom of the medal. The red, yellow, black and white stripes on the medal's ribbon represent the four directions.

With flute music playing in the background, Ed Albert of the Cherokee of the Bear Clan blessed each individual veteran with a bundle of smoldering sage and gently touched their heads, shoulders and hearts with eagle feathers.

Tony Largo, a Vietnam-era veteran who served in the U.S. Army's 82nd Airborne, said a blessing in the Navajo language and presented the medals to each veteran and shook their hands.

"A lot of people don't realize all the trials and tribulations we went through in the service," Largo told a veteran. "Only us comrades know that. We all at one time or another stood together - all ethnic groups - we were all brothers. It is a great pleasure to present you with this medal and thank you for your service."

Many were veterans of World War II and the Korean War and Santillan said they honored them as their grandfathers and grandmothers who are the heads of their families.

Afterward, Santillan told the veterans that this medal has a certain energy to it.

"When we think of things that happened in our veteran lives or when nightmares come as they sometimes do, think about the blessing you have had today and that will lessen it for you," Santillan said.

At the end of the ceremony, Executive Director Rebecca Ratliff presented Santillan with a bouquet of flowers and said "on behalf of the Peridot and our veterans we thank you for coming and honoring our veterans."