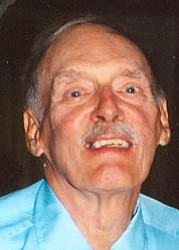 Glenn Taylor was born on July 18, 1929, in Detroit, Mich., to Ola Glenn Taylor and Marsalia (Mercedes) Chimeilewski. He died Nov. 18, 2010, after battling with Parkinson's disease.

As a child, he relocated to Robinson, Ill., where he was raised by his paternal grandparents. It was in Robinson where he met the love of his life, Norma Jean Tipton. They married July 5, 1952, and enjoyed 56 wonderful years of marriage. He graduated from Eastern Illinois University with a bachelor's degree in Engineering. Glenn served in the Army during the Korean War and later worked for the government where he held several patents in the aerospace industry. His job took him and his family around the country until 1970 when they settled in Tempe, Ariz., and Glenn worked at Williams Air Force base. He retired in 1980 and relocated to Prescott, Ariz., where he lived until his death.

He is preceded in death by his wife Norma. He is survived by his two children, daughter Julie Ann Garand (William) of Reno, Nev., and Michael Taylor (Jennifer) of Prescott, Ariz.; six grandchildren; and four great-grandchildren.

In lieu of flowers, the family suggests donations to the Activity Center at Good Samaritan Village, 1030 Scott Drive, Prescott, AZ 86301