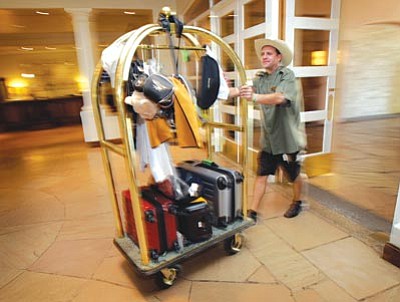 Matt York/The Associated Press<br> In this photo taken on Oct. 14, David Dumyahn, a bellhop of at the Fairmont-Scottsdale Princess Resort in Scottsdale, brings in luggage for guests. A boycott of Arizona in the wake of a controversial immigration law has cost the state more than $140 million in lost meeting and convention business, a new report released Thursday shows.

Seven months later, the boycott's effects are coming into focus, showing it has been a disruptive force but nowhere near as crippling as originally feared.

Businesses have lost lucrative contracts and conventions have relocated, performers called off concerts, and cities and counties in about a dozen states passed resolutions to avoid doing business with Arizona. A report released Thursday says the boycott has cost the state $141 million in lost meeting and convention business since Republican Gov. Jan Brewer signed the law in April.

But the state's economy hasn't come to a screeching halt - as some who organized the boycott hoped. In fact, more people went to the Grand Canyon this summer than last year, and more stayed in Arizona's hotels and resorts, according to a review by The Associated Press.

"My occupancy has been pretty strong," said Flagstaff bed and breakfast owner Gordon Watkins. He got a few calls from confused international customers wondering if they would be asked for their papers, but no one canceled their reservations, he said, and business has been brisk.

Many conventions decided not to move, despite questions from their members. At the Phoenix Convention Center on Thursday, about 1,300 exhibitors, distributors and buyers were attending an annual show put on by the National School Supply & Equipment Association.

"We just kind of kept our eye on our members, and at least in our industry, they were coming whether that law was there or not," said Bill Duffy, the group's vice president of operations and meetings.

The most controversial parts of the law are on hold, including a section that would require police officers who are enforcing other laws to question the immigration status of those they suspect are in the country illegally. The federal government has won an injunction blocking the provisions and Arizona is awaiting a decision from the 9th U.S. Circuit Court of Appeals in San Francisco on its appeal.

Civil rights groups organized the boycott to slow the state's economy in much the same way that a boycott punished Arizona 20 years ago over its refusal to honor the Rev. Martin Luther King Jr. with a holiday. After voters approved that law, the NFL pulled the 1993 Super Bowl from Phoenix, and the NBA told the Phoenix Suns not to bother putting in a bid for the All-Star game. By the time voters finally passed a holiday bill two years later, estimates of lost convention business in the Phoenix area alone topped $190 million.

This time around, groups called on people not to fly Tempe-based US Airways or rent trucks from Phoenix-based U-Haul. There was talk of fighting Major League Baseball's plans for holding the All Star Game in Phoenix next year.

Most of those protests haven't come to fruition. The midsummer classic is still on, a spokeswoman for US Airways said the company saw no effect from the boycott call, and a U-Haul International executive said the same thing.

"In fact, year over year, we're up," said Jim Pena, the rental firm's president for Arizona.

Cities that called for boycotts, including Los Angeles and San Francisco, largely found themselves with few contracts to cancel and little Arizona travel to avoid.

"Ultimately only a few city employees' travel was changed and the few contracts we had with Arizona companies were allowed to go forward for economic reasons," said Tony Winnicker, a spokesman for San Francisco Mayor Gavin Newsom. A city of Los Angeles spokeswoman said only a few contracts were not continued, none large.

Still, some Arizona businesses have taken a big hit. In August, officials in Santa Monica, Calif., recommended that Phoenix-based Cavco Industries be awarded a $3 million contract to replace 20 aging mobile homes in a city-owned park. But the city council refused to give the contract to Cavco - the low bidder - because the company is Arizona-based, and Santa Monica had passed a resolution imposing sanctions.

"I don't think that what they did serves any real useful purpose," said company CEO Joe Stegmayer. The homes would have been built at a plant near Phoenix, he said, which would have led to more work for the primarily Hispanic work force there. "I don't think it really meets their objectives of trying to help people in the Hispanic community, for example, or the average working person."

The pain also has been felt by the convention industry. An estimated 15 million visitors come to Arizona each year for vacations, conventions and sporting events such as the Fiesta Bowl, pro golf tournaments and baseball spring training. The state tourism office estimates that conventions and other tourism-related activity brought in $16.6 billion in 2009 and that 157,200 people were employed in the industry.

An analysis commissioned by the Center for American Progress put hotel industry losses during the first four months after the signing of the law at about $45 million. Visitors would have spent an additional $96 million during their stays, said Angela Kelley, the group's vice president for immigration policy and advocacy.

"This is as much I think to serve as a warning to other states, particularly those who rely on tourism and conferences and conventions, that there is an economic impact to it," Kelley said. "We feel like this is a very modest slice, just a piece of what the economic impact is, and we don't think that we're overstating it or overselling it."

The study was paid for by the group, a liberal-leaning think tank, but conducted by the respected Scottsdale-based economic firm Elliott D. Pollack & Co. It also found that canceled meetings and conferences could cost the state nearly 2,800 jobs, $87 million in lost wages and more than $250 million in lost economic output over the next two to three years.

But conventions and the business they spark bring in much more revenue than the leisure market, said Debbie Johnson, president and CEO of the Arizona Hotel & Lodging Association, and the increase in visitation is compared with dismal 2009 occupancy levels that were below national rates.