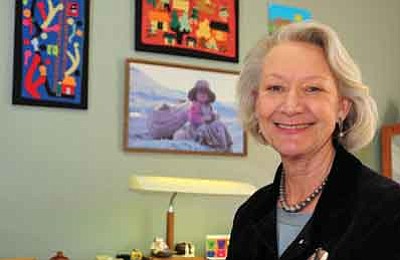 Les Stukenberg/The Daily Courier<br>Becky Ruffner, who was among eight recipients of the 2010 World Award honorees of the Girl Scouts-Arizona Cactus-Pine Council, will be honored at an awards luncheon Dec. 4. for her World of Humanity Award.

PRESCOTT VALLEY - Becky Ruffner took part in community service projects as a Brownie and Girl Scout growing up in Prescott.

"We did not do recycling," Ruffner recalled. "We did things that 8-year-old girls could get their heads around. We did cookies. We did crafts."

Her mother, Elisabeth, was the troop leader in addition to working full time in the family mortuary and raising three children.

Looking back, Ruffner, 63, realizes her involvement as a Brownie and Girl Scout inspired a career in child advocacy.

Ruffner, the third generation of a family that has been in Prescott for five generations, founded Prevent Child Abuse Arizona in 1989.

"I was working as a consultant in child abuse prevention," she said. "I had so many projects. I needed an organizational structure to support it."

Prevent Child Abuse has blossomed into a statewide entity with eight full-time employees and five consultants, and headquarters in Prescott Valley, according to Ruffner.

In appreciation for her achievements, the Girl Scouts-Arizona Cactus-Pine Council recently announced the former Girl Scout will receive the World of Humanity honor at the council's 2010 World Awards luncheon.

"Becky was selected because she has been involved with state and local child advocacy for 20 years," said Robin Adams Telle, public relations/communications manager for the council.

"Becky has helped to craft state legislation, including the establishing of the Healthy Families Program and Child Fatality Review Task Force," Rosenberg wrote. "She is an ever-ready advocate for state policies, laws and appropriations that will benefit the well-being of children and their families."

Ruffner said she will present Rachel Darland, a Chander High School student who will receive a Young Women of Distinction honor. The luncheon will take place at noon Dec. 4 at the Arizona Biltmore Spa & Resort in Phoenix.

Ruffner, who initially worked out of a cardboard box in her home, awaits completion of a 5,100-square-foot building in Prescott Valley that will house her organization. Prevent Child Abuse's capital campaign needs to raise $447,000 to pay for finishing the building.