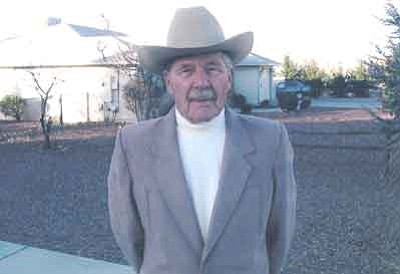 Roland enlisted and proudly served in World War II in the U.S. Navy from 1942-1946. He served in the European theater aboard the USS LST-46, whose role was to ferry soldiers and supplies from England to Normandy, while returning the wounded back to England during the D-Day invasion of June 1944. In August 1944, this vessel ferried French Navy sailors from Algeria to France in Operation Dragoon (the invasion of southern France).

Roland later also served in the Asiatic-Pacific Theater aboard the USS LST-1142, performing occupational duties in the Far East and China between August 1945 and February 1946. He received three promotions during his service, reaching the rank of Water Tender, second class, while receiving the American Theatre Medal, Victory Medal, European Theatre Medal, and Asiatic Pacific Medal.

He was a past Exalted Ruler of the N.J. Elks Lodge. Roland loved ranching, hunting and fishing.

Nicheside services will be 1 p.m., Friday, Nov. 19, 2010, at the Prescott National Cemetery, with full military honors.