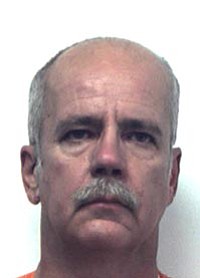 Prescott Valley Police investigators Friday arrested a 53-year-old kidnapping suspect from Prescott who fled from officers during a high-speed chase and later crashed his vehicle on Fain Road in late October.

Investigators say they did not arrest Gunter immediately after the late-October crash because he was hospitalized in very serious condition. Following his release from a rehabilitation hospital Friday, he was arrested.

Gunter's arrest came nearly three weeks after the man allegedly kidnapped his 52-year-old estranged wife, who had an order of protection against him. At about 6 p.m. on Oct. 23, PV police responded to the 1900 block of Fire Butte Way for a welfare check on Gunter's spouse. Officers say they found the woman's front door ajar and that she and her vehicle were missing.

Police later determined that the woman had been kidnapped after finding her at the Circle K convenience store in Mayer.

Officers say the victim told them that Gunter broke into her home and then tied her up and gagged her. She added that he assaulted her before driving her while bound to the Phoenix/Anthem area, where he forced her to withdraw money from her bank account.

Police say Gunter assaulted the victim a second time in a rural area near Anthem before driving her back to Mayer and releasing her. Officers added that Gunter subsequently drove to Prescott Valley and, in an attempt to flee a police pursuit, ran into an embankment near Lakeshore Drive and crashed.

After the crash, paramedics flew Gunter to John C. Lincoln Hospital in Phoenix with severe injuries, including head trauma. He was later taken to Yavapai Regional Medical Center.