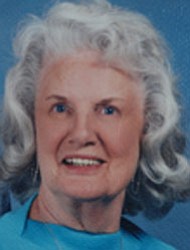 Marilyn Alice Griffith passed away peacefully on Nov. 5, 2010, at the Peridot Assisted Living residence in Prescott, Ariz., with her beloved husband of 69 years at her side. She was born Aug. 6, 1921, in Rutland, Vt., to Amos and Gracia Lemeris.

Her husband, Bernard M. Griffith, proudly served in the United States Marine Corps in three wars: World War II, Korean and Vietnam. During his 13-month deployments, she efficiently 'held down the fort' and entertained herself by exposing her daughters to several sports activities and took part in many herself. Her will to help others was shown with well over 1,000 hours of donated time to the Navy Relief to help other military families. Marilyn was an independent woman and was able to endure long separations during Bernard's deployment, when professional support systems did not yet exist. She gave her two twin daughters this same independence and shared with them her strong love of animals - a cat and dog were always part of the household.

In lieu of flowers, donations may be made to Tender Loving Canines Assistance Dogs at www.tenderlovingcanines.org or Hospice, to whom the family is sincerely grateful for their loving care.