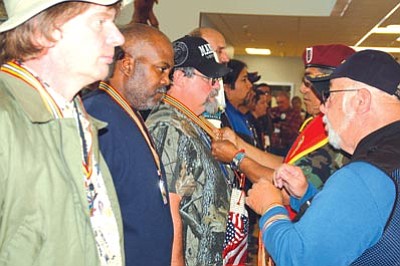 Fifty veterans received the Warriors Medal of Valor Tuesday morning from the Military Order of the Purple Heart Chapter 608 at the domiciliary at the Bob Stump Veterans Affairs Medical Center in Prescott.

Mel Vinson, a Legion Rider from Post 40 in Chino Valley, had the former servicemen and servicewomen get in formation. Then Tony Largo, a Vietnam-era veteran who served in the U.S. Army's 82nd Airborne, told the veterans he was honored to present them the Warriors Medal of Valor, which they all deserved.

"Our health is not like it used to be in our 20s, so I'm asking the good Lord to keep us in our health and I'll say it in my language," said Largo, a member of the Navajo Nation, as he gave the blessing.

As flute music played, Ed Albert of the Cherokee of the Bear Clan blessed each individual veteran with a bundle of smoldering sage and Larry Kimmel of the Miami Tribe of Indians of Indiana gently touched their heads, shoulders and hearts with eagle feathers.

Largo then presented each veteran with the Warriors Medal of Valor.

The Warriors Medal of Valor was designed by Marshall Tall Eagle Serna, who wanted to honor veterans and show appreciation for their sacrifices, said USMC Sgt. (Ret.) Alfonso Santillan Jr. of the Military Order of the Purple Heart, Chapter 608.

The front of the medal shows the head of an eagle with an American flag in the background and two eagle feathers at the bottom of the medal. The red, yellow, black and white stripes on the medal's ribbon represent the four directions.