Have play, will produce ... PFAA looking for young playwrights 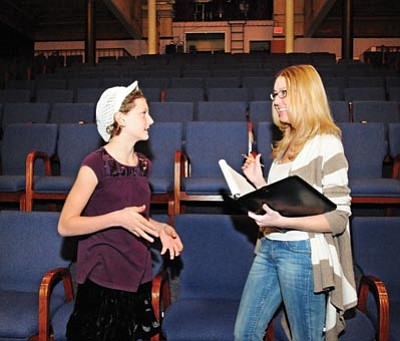 Brett Soldwedel/The Daily Courier<br> Sage Taylor, 10, left, is a playwright and discusses being part of the upcoming Young Playwright Festival with Tiffany Antone.

PRESCOTT - When 12-year-old Sierra Cottle goes to sleep each night, she dreams about a certain play she is writing.

"I keep a notebook by my bed so I can write the ideas down," she said.

When the Prescott Fine Arts Association (PFAA) announced it was accepting play submissions for its new Young Playwrights Festival program, she jumped at the chance to write her own play for possible production. She started reading scripts and performing on stage when she was 8 years old.

"I love writing," she said. "I figure I've seen quite a few scripts and I might be able to do it."

Children in grades K-12, whether attending a traditional school or home schooled, have until Nov. 19 to deliver their original scripts to the PFAA office, 208 N. Marina St., in Prescott. Experienced theater staff are available to help students get started writing or overcome stumbling blocks.

"It's just a magical moment when you see your play unfold before your eyes on stage," said Tiffany Antone, PFAA volunteer education coordinator.

Antone, who also is on staff at Northern Arizona University-Yavapai at Prescott Valley, recently returned to her hometown of Prescott after a successful career as a professional playwright in Los Angeles. Actors have read and performed her plays throughout the country from California to New York.

"This is a chance to exercise their imaginations," Antone said.

"I love writing because I can create my own world," Sierra said. "I can create evil villains if I want to. It's fun to create different characters."

Ten-year-old Sage Taylor already has written and produced one play that starred Sage and her sister. It played to critical acclaim in the girls' bedroom.

"It was so much fun," Sage said. "I wrote it for six parts but we only did it with two."

The two young playwrights' writing habits are about the same as professional playwrights - they write when inspired and suffer writer's block when they are not.

"When I heard about the playwright contest, I didn't know what to write about," Sage said. "My mom and I drove around and brainstormed ideas. Once I got the idea, everything flooded in."

Sage said she writes "when I feel like it" and carries a notebook and pen with her to jot down ideas "when they come to me."

"I write anytime I get the urge," Sierra said. "Sometimes I think I'll write for five minutes, but end up writing for three hours."

When she gets an idea, she'll write it down in her notebook, on a paper bag, or anything handy including the inside of her arm.

"We want to give the kids the ability to express themselves," said Jon Meyer, PFAA executive director. "For this, they can write because they want to - not because they have to."

PFAA provides "how to" pamphlets for students that may need help getting started, but Antone said there is "no one certain way to write a play."

"The students are not limited in any way except that the plays should be family-oriented," she said. "The neat thing about kids is that they don't have the mindset that they can't do something."

A committee reviews the plays, and blind-chooses one winning play from each age group - committee members do not see the students' names or any other information that might identify a writer. Winning plays are performed March 6 in the PFA Theater, which provides the cast, set and costumes.

"But the playwright is involved with the entire production," Antone added. "It's totally free for the kids."

For more information about the Young Playwrights Festival including submission guidelines, visit www.pfaa.net and click the link under "Education," call 445-3286, or e-mail Antone at youngplaywrights@pfaa.net.