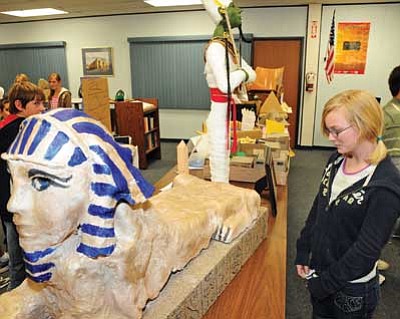 Brett Soldwedel/The Daily Courier<br> Granite Mountain Middle School student Crystal Hensley, 11, browses through the 3-dimensional displays on Wednesday the sixth-grade students made for their ‘Egyptian Museum’ located in the library at the school.

PRESCOTT - Sixth-grade students at Granite Mountain Middle School transformed the school's library into a museum on Wednesday. On display were objects the students made as part of their study of ancient Egypt.

The student artwork ranged from the most basic of Egyptian items - clothing, game boards and shadufs (scoops) to images of Cleopatra, the Sphinx, pyramids and the god Osiris.

David Pearce chose to make an image of Osiris because he is fascinated the Egyptian mythology.

Pearce explained that Osiris was the king of Egypt. His brother, Set, was jealous of him and sealed Osiris into a box and threw the box into the Nile river (sarcophagi were based on the box in this myth).

"His sister/wife Isis found him and restored his life," Pearce said.

Just as Pearce is fascinated with Osiris, Tyler Gallo is drawn to the Sphinx.

Although he finds the ability of ancient Egyptians to build and design interesting, Gallo would not have liked to live there.

Social studies teacher Kristen Lyn's sixth-graders have created the Egypt Museum for the past 10 years. This year, the museum expanded to include work from Tom Iveson and Megan Lehman's social studies classes.

Lyn was inspired to create an Egypt Museum at Granite Mountain after visiting the Egyptian display and the British Museum in London, England.

Sixth-grader Hayley Bruso has mixed feelings about living in ancient Egypt. While she thinks the way the people lived is interesting and she thinks she would like to be mummified, she knows she would miss television.

Devin Torres agrees that the mummification process is "the coolest thing. It is interesting that when you die, your stomach is slit open on the left side and your organs are taken out."

Torres was surprised to learn how ancient Egyptians made their homes out of mud bricks.

"Most people think of the pyramids when they think of Egypt. I liked learning about what the people ate, how they lived and their hobbies," Torres said.

Ancient Egyptians made their chariots out of medal. Sixth-grader Schyler Cohan made a reproduction out of wood.

"Egyptians used their chariots for lots of things like sports, war and hunting," Cohan said.

Cohan would like to have lived in ancient Egypt, but only if he could have been royalty. He thinks they had more freedom.

"The regular people were mostly slaves," he noted.

Iveson explained that all 180 sixth-graders "made an individual 3-dimensional project. Kids get tired of seatwork. This is doing something hands-on."