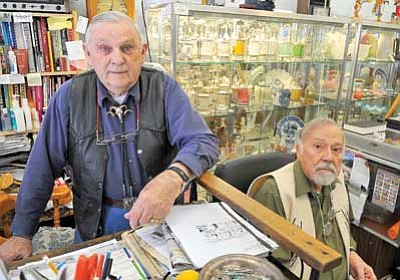 Two Prescott World War II veterans who have applied to go on a free flight for veterans to Washington D.C. to see the World War II memorial this September are trying to get people in the Prescott area excited about raising money for Honor Flight.

Bill Swift and Robert Dale Coffey have a jar by the cash register of their store, Red Lamp Antiques, in Prescott that they hope to fill with donations for Honor Flight.

Honor Flight is a nonprofit organization that provides the estimated cost of $750 to fly and lodge a veteran going to Washington, D.C., through community donations and fundraisers, so that the trip is free for veterans.

World War II veterans and those with terminal illnesses have top priority, and more than 350 veterans are on the waiting list, said Susan Howe, director of Honor Flight of Northern Arizona.

"Our youngest World War II veteran is 84, and the average age of the veteran going to Washington, D.C., with us is 89. On the last trip we had a gentleman who was 89," Howe said.

Coffey and Swift, who are both in their 80s, are waiting to see if they can get on the September Honor Flight.

Coffey worked as an operating room technician in the Navy hospital corps during World War II. He was stationed on the E.D. Patrick, a ship that traveled between Guam, San Francisco, Hawaii, and Japan.

Coffey said he's been to Washington D.C., before when he was stationed in Norfolk, Va.

Swift was in the Navy during World War II and stationed in Indiana and Wisconsin. Swift first went to radio school, but was later assigned to small stores issuing clothing. He said he's never visited Washington, D.C., although he drove through it once to catch a ship to Europe.

One volunteer for every two veterans accompanies and helps them on the two-night trip, Howe said. Often, veterans are in wheelchairs or need other assistance.

Volunteers also help veterans prepare for the flight from Sky Harbor International Airport in Phoenix, said Howe, who added that volunteers pay their own way.

While they're in Washington, D.C., the veterans and the volunteers go to the World War II Memorial for a few hours and meet with a congressional representative, then they tour the Lincoln Memorial, the Vietnam Memorial, the Navy Memorial, the Iwo Jima (Marine) Memorial, Capitol Building and Arlington National Cemetery.

"I would love to do 10 flights this year, if I could," Howe said. "The reason I got involved with Honor Flight was my dad, who was a veteran. I have a real respect for veterans and what they've done."

The June 1-3 Honor Flight is full, but there are still openings for the flights in September and October.

Swift described how school kids in Holton, Kan., hosted bake sales, car washes and other fundraisers to help send local veterans on the trip to Washington, D.C. and hopes local groups will step forward in similar ways. Howe said groups in Flagstaff and Wickenburg have held spaghetti dinners to raise funds for veterans.

"The Diamondbacks offered us tickets at a reduced rate. We receive money back from each ticket we sell. We'd love to send a whole bunch of veterans and their families to the game," Howe said.