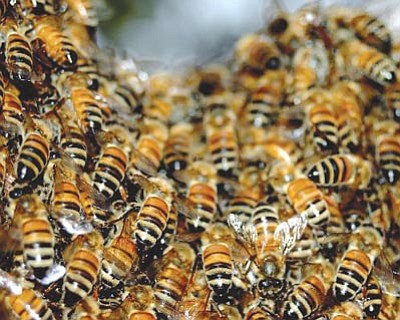 CHINO VALLEY - Eric Warthan credits his neighbor's quick thinking for saving his life Tuesday when a swarm of bees attacked him in Chino Valley.

Warthan's neighbor Ryan West grabbed a hose and sprayed Warthan as Warthan came running his way with the bees attacking him.

Then West led Warthan into his home, despite the fact that about 20 bees also got inside and one stung West.

West's girlfriend Kathleen Larson pulled 26 stingers out of Warthan's skin, mostly from his face and neck.

Warthan said he was just walking from his truck to his home when the bees attacked.

He took off his shirt to cover his face, but then he couldn't see where he was going.

"That was a nightmarish experience," he said. "They're real personal about it - they go after your face."

The bees also attacked several children getting off the school bus a few blocks away about an hour earlier on Tuesday, said West, whose children saw the attack.

About the same time, bees attacked Warthan's wife Pepper as she left the house to go pick up her husband.

Several bees chased her around the yard and one stung her before she was able to get several out of her hair and get into her truck.

When the couple returned home, they decided Eric would run to the front door of the house and unlock it, then Pepper would run in after him, just in case the bees were still around.

That's when the bees attacked Eric as Pepper watched helplessly from the truck.

After the attack was over, Eric felt nauseous and called for an ambulance. Chino Valley firefighters arrived and checked him out before concluding he didn't need hospitalization.

A firefighter in full gear brought the truck keys back to Pepper so she could drive to the West house and pick up her husband. They then went to the local pharmacy and got advice about what medicines would sooth the stinging.

The experience was especially frightening for the Warthans because they both have a fear of bees.

"It's the only insect on the planet that scares me to death," Eric said. But he still never thought bees would attack him like that.

The bees might have come from a hive in an unoccupied nearby house. West said he warned the homeowner a few weeks ago about the hive. While Pepper was trapped in the truck Tuesday, she saw someone don a protective suit and go after the hive at that house.

The owner of that house, La Dema Congdon, said town officials warned her about the bees about 1.5 years ago and she hired an exterminator who sprayed the mobile home, but apparently the bees returned or the exterminator didn't get them all. So when a town official called again recently, she hired a beekeeper.

The beekeeper warned neighbors he would be trying to capture the bees Tuesday, she related. The beekeeper also thought other hives were in the area, she said.

While the Warthans and West don't know whether the bees were Africanized, the bees' actions suggest that is possible.

Africanized bees are more likely to attack people, and they go after the head and neck. They also tend to go after darker-colored animals because they resemble bears that eat their honey. Warthan was wearing a black shirt and black pants Tuesday.

The Africanized bees have been migrating northward and interbreeding with more docile domestic bees since a researcher crossing aggressive African bees with others accidentally let them escape from a Brazilian laboratory in 1956. Some call them killer bees. They arrived in the United States in 1990. Local experts say they have been in Yavapai County for at least a decade.

Local beekeepers hope isolated incidents of Africanized bee attacks don't turn people against bees in general. Bees pollinate countless flowers and food, and people can use their honey to increase their immunity to allergies.