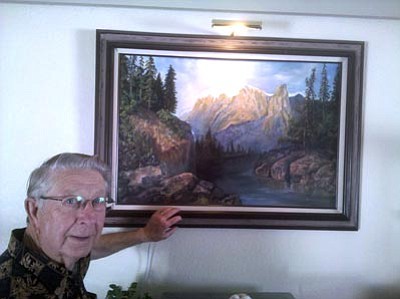 Courtesy photo<br> Dr. Vernon Rodgers plans to make the most of his retirement by painting more.

After decades of pastoring and teaching people of his faith, Dr. Vernon Rodgers is retiring as Prescott Christian Church's associate pastor to senior adults.

"I have simply loved it. I've worked with Sunday School and above in church - such a gracious group to work with," he said this week.

Rodgers, a Colorado native, received his bachelor of arts degree from Manhattan Christian College in Manhattan, Kan., in 1952. During the ensuing years, he completed his master's degree in psychology and Ph.D. in church administration at the California Graduate School of Theology in Glendale, Calif.

Along with his duties as associate pastor, Rodgers has been director of Prescott Christian Church's missions ministry for 10 years, carrying out the church's outreach in such places as Indonesia, Africa, Peru and on Indian reservations in Arizona. He also helped establish a mission in Indonesia in 1968 and remains on its board of directors. This mission has helped thousands of people obtain medical care and educated hundreds of young people, he said.

Rodgers credits his wife, Jodie, for being his strongest supporter throughout his ministry. "She has been very active with me in the senior adult ministry," he said. "I couldn't have done it without her."

The Rodgers have three daughters, Ruth Spencer, Julie Ikozie and Charlene Reeder; a son, Robin; and 13 grandchildren and five great-grandchildren.

Now 80 years old, Rodgers said that he has kept busy, kept his mind alive and stayed in good physical condition. "That makes a difference," he said of his longevity.

Retiring doesn't mean that he intends to sit back, though. He and his wife hope to travel, and having less duties at church will allow Rodgers more time in his artist's studio.

He paints in oil and acrylics, especially landscapes or works that reflect the Southwest.