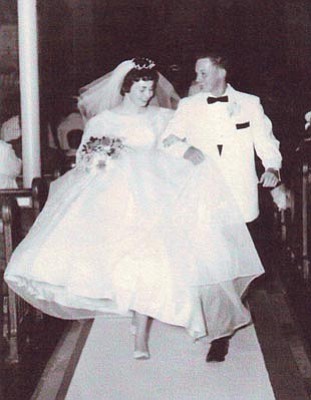 Delia (Humphrey) Parker and Gary Parker recently celebrated their 50th wedding anniversary. They were married on May 7, 1960, in St. Joseph's Catholic Church in Maumee, Ohio, with Rev. Joseph O'Brian officiating.

Delia and Gary were high school sweethearts, both having graduated from Maumee High School. Gary retired from Champion Spark Plug in 1991 and Delia retired from United Parcel Service in 1995. In 1996, they moved to Prescott and love it here. They go back to Ohio twice a year to visit family and friends.

They will commemorate their anniversary this summer in Maumee with a renewal of their vows in St. Joseph's Church and a dinner hosted by their children, Traci (Parker) Creps, Steven Parker and Jon Lussier, husband of their late daughter Tari (Parker) Lussier. Besides their children, in attendance will be their four grandchildren, Shannon, Justin, Rachel and Christopher, along with many family members and friends.