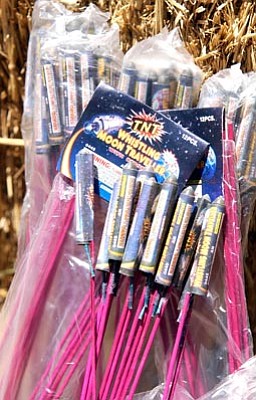 Local fire officials are concerned about a new law that legalizes some fireworks in Arizona, and they already are talking about banning them inside municipalities.

That's good news for people like Jim Jensen, who said he knows first-hand that sparklers can ignite wildfires.

Jensen's relative brought sparklers along when he visited Jensen's Prescott home about a decade ago, and ended up igniting a wildfire in Jensen's grass with them.

"It just took off," Jensen said. "If that wind had been blowing, it would have run up Aspen Creek."

Luckily, the family was able to douse the blaze.

Jensen is angry to hear that the Legislature and Gov. Jan Brewer approved a bill legalizing sparklers and other ground-based fireworks as of Dec. 1.

"Here we are, allowing something I feel is flat-out dangerous," Jensen said. "We're going to burn because of it."

The City of Prescott is likely to ban those newly legal fireworks at least during the wildfire season, Prescott Fire Marshal Eric Kriwer said. The City Council also might consider whether to ban them the entire year.

Prescott fire officials are talking with other municipal fire officials throughout northern Arizona to discuss how they might consider similar fireworks bans so residents experience less confusion, Kriwer said.

But federal land managers still are worried that misinformed people will think fireworks are now legal all over Arizona.

"There's going to be an education process that we're going to be dealing with," said Jeff Andrews, fire management officer for the Prescott National Forest.

Kriwer pointed to some sobering statistics about U.S. fireworks from the National Fire Protection Association. Fireworks ignited 32,600 fires in 2006, killing six people and causing $34 million in property damage. In 2007, emergency rooms treated 9,800 people for fireworks-related injuries, with the most injuries coming from sparklers.

The fireworks industry has been pushing the legislation for years. Brewer vetoed a similar bill last year, saying she was concerned about wildfire risk.

Fireworks remain illegal if they are designed to "rise into the air and explode or detonate."

The law says municipalities can regulate the use of the legalized fireworks, and counties can do the same "when there is a reasonable risk of wildfires."