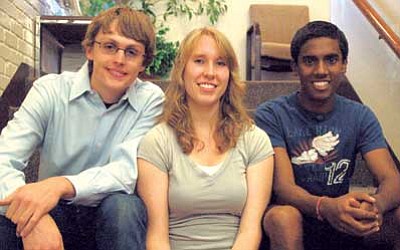 Prescott High School seniors Ryan Lane, Savannah Martin and Nikil Selvan no longer have to worry about how to pay for college.

Martin, who is headed to the University of Arizona, and Lane and Selvan, on their way to Arizona State University, are recipients of a Flinn Foundation scholarship.

Arizona's three universities pay tuition costs for each Flinn scholar. The Flinn Foundation pays for everything else - from room and board, to study abroad.

The total value of the scholarship exceeds $54,000 - on top of the tuition provided by the universities.

For Martin, receiving the Flinn means "freedom. I won't have the burden of paying for college. That gives me academic freedom. It also means a lot to my family. On my father's side, I will be the first to go to college."

Arizona high school seniors applying for the Flinn scholarship must rank in the top 5 percent of their graduating class; attain at least a 3.5 grade point average; score a minimum of 29 on the ACT or 1300 on the SAT I (reading and math sections only); participate and demonstrate leadership in a variety of extracurricular activities; be a U.S. citizen; and be an Arizona resident for two years before entering the university.

"The central thing though, is that you be heavily involved in things you are truly passionate about," Lane said.

Applicants also must submit three essays during the application process. The entire process culminates with an interview with the selection committee in Phoenix.

For Selvan, the application process was "a great motivating force. For a few months before I started the process, I didn't feel I knew what I wanted to do; I was drifting."

For the seniors, the 20-minute interview with the selection committee was easier than expected.

"It was unique. It was not daunting or grueling," Lane said.

Selvan said interviewing in the afternoon gave him time to review what he wanted to say and identify the points he wanted to hit.

According to Selvan, the interviewers took the time to get to know the students and what motivates them.

Selvan told the interviewers an experience he had while visiting India a few years ago, and how it made him realize many people would like the opportunities available to him.

Selvan and his mother were in a shoe store in India when a woman approached the store, but did not enter. The frail woman was begging and was carrying a baby.

"She was an untouchable. I wanted to help her, but my mom said we couldn't because she was a different caste," Selvan said. "It made me think about the opportunities I had that others do not."

Martin "had a really good day" when she was interviewed.

"I convinced myself that no matter what happened, I was having an experience few others have had. I tried to take my time and plan what I was going to say. At the end, I had just enough time to say, 'I am a Flinn scholar,'" Martin said.

Selvan is a four-year member of the PHS tennis team. He has served as a co-captain since his sophomore year.

"He is a very, very good tennis player," Lane said.

Lane and Martin are members of "The Crisis No. 1," a five-member rock band that recently played at the PHS prom.

In addition to this year's recipients, 10 other PHS seniors received Flinn scholarships between 1986 and 2005.

Principal Totsy McCraley thinks having three Flinn scholars in one year "says a lot about PHS. When you look at the number of Flinn scholars graduating from PHS and compare it to other rural and urban schools in Arizona, it reflects well on PHS's commitment to excellence in educating students."

"If they think that any part applies to them, they should apply," Lane said. "You learn so much about yourself."