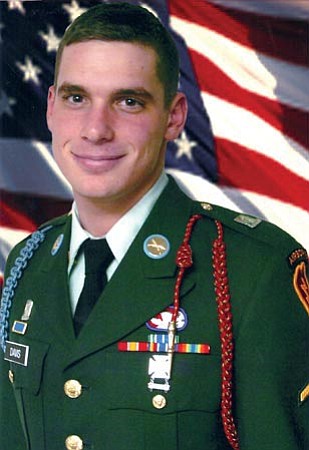 Specialist Curtis James Davis was born on Oct. 21, 1989, in Perth, Australia, but spent most of his years in San Diego, Calif. He enlisted in the Army on the 6th of March, 2008, and attended One Station Unit Training at Fort Benning, Ga. Upon completion of both Infantry and Airborne training, SPC Davis was assigned to Crusader Troop, 1st Squadron, 40th Cavalry Regiment, of the 4th Brigade Combat Team (Airborne), 25th Infantry Division, Alaska, where he served honorably as a Squad Automatic Weapon Gunner in 3rd Platoon.

Soon after joining the unit, SPC Davis deployed to the national Training Center in Fort Irwin, Calif., in preparation for Operation Enduring Freedom. He deployed to Afghanistan on the 19th of February, 2009. By every account he performed his duties with a vigor that endeared him to both peers and leadership. On the 7th of February, 2010, Specialist Davis returned to Fort Richardson, Alaska, having admirably completed a 12-month combat deployment.

Curtis James Davis died in Providence Hospital, Anchorage, on the 14th of March 2010.

Curtis is survived by his wife Victoria Davis and his 4-month-old son Cayson Davis of Anchorage, Alaska; his mother, Jerri Bayles, and stepfather, Henry Bayles, of Prescott, Ariz.; his father Roy Davis, his brother Kristopher Davis of San Diego, Calif.; his sister Caitlin Davis of Prescott, Ariz.; and maternal grandparents Marjorie and Jim Niergarth of Michigan.