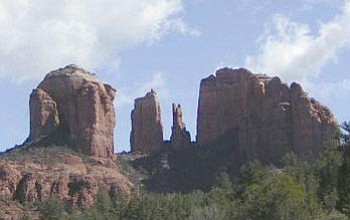 The Arizona Department of Public Safety's Ranger helicopter helped rescue a man stranded Wednesday on top of a rock spire in the Cathedral Rock formation outside Sedona.

At 1:30 p.m., Riad Edwards, 21, of Clackamas, Ore., called 911 to say he was trapped on a sandstone spire and couldn't get down, said Dwight D'Evelyn, spokesman for the Yavapai County Sheriff's Office.

Edwards told Sheriff's deputies after he and his dog reached the top of the trail at Cathedral Rock, he hiked south 50 yards, tied his dog to a tree and climbed hand over hand up a crevice in the rock to the top of a sandstone spire, D'Evelyn said.

A ground team determined they could not reach Edwards, so Sedona Fire District's Technical Rescue Team began a technical/rope rescue, D'Evelyn said. The teams asked the DPS Ranger helicopter to assess the situation from the air.

The Ranger pilot picked Edwards off the spire around 5 p.m. and landed, reuniting the man with his dog, D'Evelyn said.

Edwards' father came out to the area after the phone call, and left the area with his son and his dog, D'Evelyn said.

Rescuers urge people to hike with a companion and use common sense when climbing rocks.

"Rock climbers regularly use ropes and other gear to get up a vertical slope like this one," D'Evelyn said. "At the very least, research these hikes on the Forest Service website, where you can see photos of the area, learn what equipment you might need and what skill level you should have."