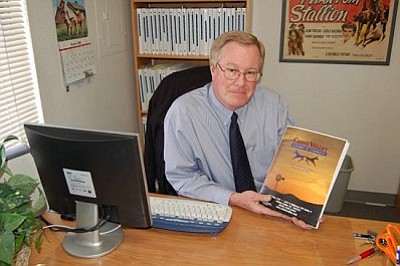 Jerry J. Herrmann/The Daily Courier<br/>Ab Jackson, Chino Valley Area Chamber of Commerce CEO, shows off a packet the chamber put together for businesses and industries interested in Chino Valley. It includes the current community profile, lodging and dining guide, "Keys to Chino," monthly business license report, list of the chamber's board of directors and briefs on education and quality of life, infrastructure and transportation, demographics and workforce, among other things.

Looking to locate or expand a business or industry in Chino Valley? If so, you need to talk to Ab Jackson, Chino Valley Area Chamber of Commerce's CEO, as the chamber contracts to handle the town's economic development work.

In Prescott, that same person would talk to Jane Bristol, director of Economic Development or her assistant.

Chino Valley's former mayor, Karen Fann, said the town had no one on its staff dealing with economic development when she took office.

She said one of the reasons the council hired Bill Pupo as the town's manager was his strong background in economic development.

"Kincaid has a lot of contacts with firms doing business in the Valley. He was talking to Fry's, Wal-Mart, etc. and making good contacts until the economy softened," Fann said.

She said the council had a shopping list of what businesses it would like to see come to Chino Valley for Kincaid to call on. "We wanted clean, good paying jobs, and not air polluting and high-water usage industries," she said.

An example of the kind of business the council doesn't want, she said, is a chip manufacturer. Fann said while it is a clean industry, it uses too much water.

Chino Valley's $30,000 is the smallest amount any of the towns in the tri-city area budget for economic development. Bristol said Prescott's budget this year is $246,669. "Our budget has been going down 9 percent a year for the past two years," she said.

Prescott also spent $167,000 this year from bed taxes for the Prescott Area Coalition for Tourism to promote the city.

Prescott Valley spends a total of $400,187 yearly for the recruitment and retention of retail and commercial businesses, industries and tourism. The town's Economic Development Department's budget is $115,000 to seek sales tax producing entities, such as retail businesses, hotels and restaurants.

Prescott Valley pays the Prescott Valley Chamber of Commerce $114,750 for business retention, expansion, network opportunities (such as mixers and breakfasts) and maintaining the chamber's website.

Fister said this money also helps develop and publish a tourism brochure and operate the chamber's tourism center, continue Prescott Valley Days, the Valley of Lights and Festival of Lights.

The town also is paying the PVEDF $165,437 yearly to bring new businesses and industry to Prescott Valley. Fister said the town's contract calls for PVEDF to land 525 jobs in a three-year period ending this year.

He said Prescott Valley pays $5,000 to the Prescott Area Council for Tourism to promote the town.

Last year, Jackson did sessions on customer service for town employees and chamber members. This year he plans to do some leadership training sessions.

Jackson ultimately would like to see two academies created. The first would be a Chino Valley Leadership Academy for future leaders so residents can learn more about local government. The second one would be a Citizens Academy so residents can serve their community better by becoming a member of Lions, Kiwanis, etc.

Arnold said every week is different. Part of it is attending council or other governmental meetings. He also works with Jackson to follow up on leads, talks with representatives of companies looking at the town, taking them through their initial process, and forwards leads from Bright Star to the chamber. Some weeks he attends trade shows, such as the International Home Builders Conference in Las Vegas, Jan. 19-22.

Jackson said one of the big players in economic development in Arizona is APS. "They bring prospects through the area for me to talk to and show sites," he said.

He also spends a lot of his time getting and following up on economic development leads from the area's state legislators.

Jackson said whenever necessary he lines up state people to come up and help him and the town's representatives to talk to prospects.

Arnold said, "The town's thing is to get infrastructure (water and sewer) in. Our job is to recruit them."

In 2009, Jackson said the chamber got an ordinance enacted allowing A-frame signs and banners while crews were widening Highway 89 on the southern end of Chino Valley. It is supporting another year's extension of the ordinance.

The chamber also launched its You've Been Shopped by a Chino Valley chamber member program, published its first lodging and dining piece, and created an economic development packet that includes the "Town's Key to Chino Valley."

Last year, with the help of Chino Valley Vice Mayor Ron Romley, the chamber also negotiated the return of promotional banners across Highway 89.

"It had been five years since the Arizona Department of Transportation had allowed banners across Highway 89 to promote events in town," Jackson said. "The banner program is a major part of economic development (business retention)."

Jackson said shortly after taking over as the town's economic development agent he contacted Duane Noggle, Chino Valley Unified School District superintendent, to build a working relationship. As a result, the quarterly Business & Educators Breakfast got its start. "I believe you can't do economic development work in a community without good schools," Jackson said.

Arnold said the chamber's relationship with the town is key. "We've got to work together to bring more businesses and industry here," he said.

Jackson said since the chamber is a registered visitors center it carries material from 10 communities around Arizona along with economic development materials.

In 2009, the chamber joined Prescott Area Coalition for Tourism and PVEDF to land a $50,000 grant to help sponsor the entities' presence at trade shows and promote the three communities.

Jackson and Arnold raised money so they could create an economic development website for the new organization. It will be up and running sometime the first quarter of this year.

Arnold said the success of the Chino Valley Economic Development Organization will depend on a good working relationship between it and the town.

Bunker said the town is happy with Jackson's efforts. "I hope we can continue contracting with the chamber for several years," he said.

Fann believes it needs to be a joint effort between the town and chamber to make economic development work.

She said Chino Valley also needs more industrially zoned property within the town limits. Existing industrially zoned land is outside of the Prescott Active Management Area. "We've got to be careful so we don't contaminate the water at headwaters to the Verde River, and take more out of the Little Chino (aquifer)," Fann said.

Jackson said a big challenge for Chino Valley's economic development work is to get exposure out of the area. "People know Prescott, but not Chino Valley," he said.