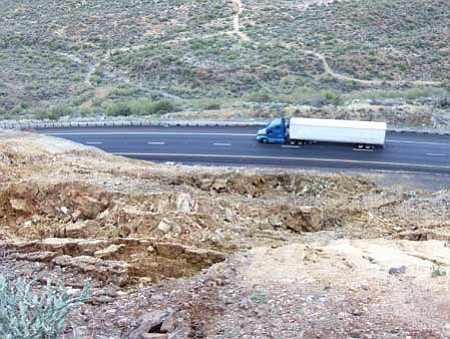 Crews this week will make repairs to this slope over Southbound Interstate 17 near BCC. Recent heavy rains destabilized the terrain.<br> Courtesy Photo/ADOT

ADOT officials said nighttime drivers can expect delays of up to 30 minutes in the area during repairs.

Crews will narrow Southbound I-17 to one lane south of Sunset Point from 7 p.m. to 7 a.m. Monday through Thursday nights over a two-week period.

ADOT is asking drivers to o slow down, allow extra travel time, and follow directional signs while staying alert for workers and equipment in the area.

After heavy rains in January and February, crews noticed that two slopes in the area where ADOT had recently repaved had become dangerous because of the possibility of rock falls.

The unstable slopes are in the same area in which crews spent the latter part of this past year repaving the interstate and lowering some of the slopes for safety reasons.

"That was done to lessen the danger of rocks falling, but in that one (Jan. 21) storm, there was 7 inches of rain. When you get that type of rain on these sides, something is going to give way," said ADOT spokesman Bill Pederson.

Pederson said heavy rains over the past two months, including 7 inches during a Jan. 21 storm, have saturated the slopes and increased the potential of rocks falling onto the roadway.

He advises drivers on southbound I-17 to visit ADOT'S travel information site at www.az511.gov or call 5-1-1 for information before traveling.

"The most up-to-date information is there," he said.