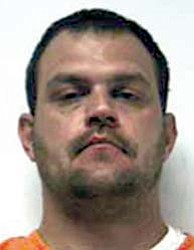 A Superior Court judge Monday sentenced a Phoenix man to 21 years in prison for a crime spree last year that included stabbing his former mother-in-law and shooting his former father-in-law in the face.

Nichlos Sellers, 36, pleaded guilty to a long list of charges including two counts of attempted murder for attacking on the Chino Valley couple as they slept, and extortion for trying to collect a drug debt from another home in Chino Valley earlier that night.

Officers in four jurisdictions chased Sellers and his co-defendant William Edward Davis Jr., 21, as they headed down Fain Road in a stolen car, police said. Just before Lakeshore Drive, Sellers pulled over. Davis jumped out and officers grabbed him. But Sellers turned off the headlights of the car he'd stolen and continued on at speeds as fast as 120 mph. Just before Highway 69, Sellers rolled the car and officers arrested him.

Davis who also pleaded guilty to attempted murder and other charges in January has since withdrawn his plea. Judge William T. Kiger ordered that a psychiatrist evaluate Davis and issue a report before further court proceedings.

Sellers, who pleaded guilty to a revised plea agreement Monday just before he was sentenced, wiped tears from his eyes but declined an offer to speak to the judge.

Kiger said he labored over the sentence.

"I told the lawyers I don't see how I'm going to get around the fact that there were two people who were badly hurt," Kiger said. But if he gave Sellers consecutive sentences he could be in prison for 30 years, a sentence the judge deemed "unduly harsh." Kiger noted that Sellers, convicted three times of previous felonies, "continued to use drugs." But he also took into account as a mitigating factor, Sellers' "grave remorse," for his actions in handing down the concurrent sentences.

The victims "have been able to find it in their hearts to forgive you which puts them in the ranks of exceptional people," Kiger said.

County Attorney Sheila Polk said Sellers was on probation for auto theft in California on July 28, 2009, and also released on bail for auto theft in Maricopa County when he committed these crimes. "This crime spree shows a man who is dangerous and unpredictable," Polk said, asking for a long sentence. The high-speed chase with the headlights out endangered the public, she said. Although the victims lived, "we could have been here on a very different case," Polk said. "We could have been here on a homicide."

Acting on a request by defense lawyer John Napper, Kiger recommended that Sellers serve his sentence in a facility where he can be treated for mental illness.