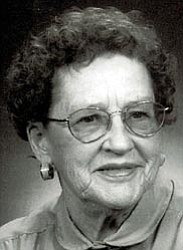 Caroline was a loving mother, grandmother, sister, aunt and friend. Her kindness touched all who know her. She was actively involved in church ministries and was employed as a nurse's aid at Fort Whipple Veterans Hospital for 15 years.

Caroline was preceded in death by husband, Thornton Henry Ross; and brothers, Howard and Jonathan Terry of New York.

Caroline was a great example of God's love to all and now praises her Lord in heaven for all eternity.