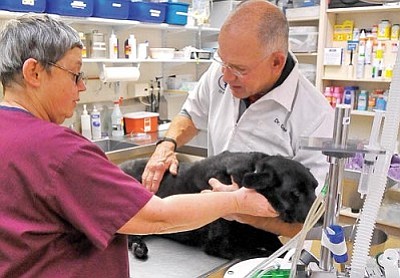 Before Rebel, a 10-year-old German shepherd with osteoarthritis, received an injection of an experimental collagen-based gel to his hips, he couldn't hop up in the car anymore, said his owner Louis Nemeth of Prescott.

"Over a period of time, not all that long, Rebel just became very hesitant to get in the car," Nemeth said. "I had to carry him in."

After the gel injection, Rebel jumped up into the car on his own again, Nemeth said.

"It was immediate improvement," Nemeth said. "Almost overnight we saw a change."

Rebel is one of 15 dogs with moderate to severe osteoarthritis and signs of lameness who have had the procedure done at Prescott Animal Hospital. The dogs are part of a national clinical study of more than 100 dogs using a collagen-based gel developed by Prescott veterinarians Dr. Craig Woods and Dr. Patricia Zahorecz, and Chandler veterinarian Dr. Jeff Kellerman at TR BioSurgical LLC.

Osteoarthritis, which is what Rebel has, develops when smooth cartilage that normally covers and protects bones in a movable joint wears away. When the bones in a joint touch each other, pain and inflammation result. Signs of arthritis include limping, difficulty climbing steps, trouble standing or sitting, lagging behind on walks, difficulty climbing in or out of cars, and difficulty squatting to eliminate.

Since Rebel received the gel injection in May 2009 from Dr. Steven Dow of Prescott Animal Hospital, he has continued to move well and has not needed any pain medication for his hip, Nemeth said.

Like Rebel, many dogs in the study have maintained their improved mobility and have not needed pain medication for three months or longer after the injection of the collagen-based gel, Woods said.

The gel's structure resembles developmental collagen, which seems to cause nearby cells to repair tissue, Woods said.

When asked how this might translate to treating arthritis in humans, Woods said he couldn't comment on that, but that the dog is a compatible model for other mammals.

Dogs' hip, knee and especially elbow joints tend to be most affected by osteoarthritis, and veterinarians have done the procedure on all three joints, Woods said.

Dow said the dogs who have had the procedure done on their hips have shown the most improvement so far.

"This is a very promising treatment," Dow said. "If my dog needed it, I would do it without any hesitation."

In Arizona, Prescott Animal Hospital and a center in Scottsdale offer the procedure, Woods said.

"We're enrolling veterinarians around the country in the program, creating regional centers where people can seek this affordable procedure for their dogs," Woods said.

The injection of the collagen-based gel costs between $800 to $1,000 for both hip joints, depending on the cost of general anesthesia and the amount of gel used for each joint, Dow said.

Before a dog is considered a candidate for the gel injection, veterinarians perform a thorough evaluation of the dog and explore other treatment options, Dow said.

"We do a physical exam of the dog, take a radiograph and discuss other options for treatment as part of the study protocol," Dow said. "We use the gel when the other treatments aren't working well or if the owners want to try it first. About half of the owners decided to try the gel first."

When a dog does not respond well to other treatments, Dow said he talks to owners about enrolling their dog in the gel's clinical study.

"It really depends on the individual and the joint," Dow said. "The gel seems to work best on dogs with hip injuries."

To qualify, a dog must have radiographic evidence of degenerative joint disease for at least six months, show persistent lameness, respond with pain when a joint is moved at less than full range of motion, have a restricted range of motion, appear stiff when walking or running, have no known infections and have normal blood chemistry a week before the procedure, Dow said.

"Dogs can be very stoic; they can let you manipulate their joint even if it causes them pain and just sit there calmly," Dow said. "That's why the radiograph, which gives you a clear picture of the bones and the joint, is so critical."

During the procedure, the veterinarian puts the dog under general anesthesia, Dow said.

"A veterinarian draws up the thick collagen-based gel into a syringe and injects the gel into the joint space," said Woods. "It's a noninvasive procedure that can be done in about 20 minutes. The dog can go home that same day after the anesthesia wears off."

The owner and veterinarian both rate the dog's walking, running, jumping ability to rise from laying down, climbing and descending stairs, squatting to eliminate, stiffness in the morning, difficulty on slippery floors and playing with family or other animals.

"I'd like to see more people use this for the success we've seen with it," Dow said. "It can also be used with other treatment modalities we use with no real side effects."