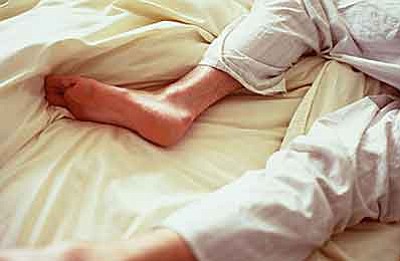 I have an eight-year-old son with attention-deficit hyperactivity disorder.

He has problems with sitting still and going to sleep. At bedtime, he walks around his bedroom. Now he tells me that his legs bother him all the time. I have been reading about ADHD and restless leg syndrome being related. What are your thoughts?

I have been drinking five to six cups of coffee a day for many years. I am having increasing trouble falling asleep and my doctor wants me to stop drinking it. I have heard that there can be an associated withdrawal. Is this true, and what can I do about it?

A: Yes, it is true. People consuming five to six cups a day are ingesting about 6 to 700 mg of caffeine. The withdrawal syndrome usually occurs 18 to 24 hours later, and consists of severe fatigue, irritability, mood swings, headache and flu-like symptoms. This can be avoided by a gradual taper. I would suggest you decrease your consumption by one cup every two days until you're off of coffee drinks all together.

How many hours do you need to wear a CPAP to get real benefit?

A: My initial answer is as long as you are asleep. However, there are several studies that have been more specific. In 2009, a study measured markers of inflammation in patients with sleep apnea. We think many of the complications of sleep apnea are due to inflammation. The study found that a minimum of four hours a night was needed to bring these levels back to normal.

My husband was diagnosed with sleep apnea two years ago. He never returned to the lab for treatment. He says he feels fine and does not want to be treated. I have been reading about the associated risks if untreated. He is 35 years old and we have two young children. Any ideas on how to motivate him?

A: You could start out by telling him the incidence of heart attack and stroke is about two to three times normal when sleep apnea is left untreated. Diabetes is also markedly increased in untreated sleep apnea. Most impacting, though, is a recent study that showed that untreated men live to an average age of 58 years old versus the usual average of 78 years. So if he wants to see his children and possibly his grandchildren grow up, his chances are much better if he gets treatment for his sleep apnea.