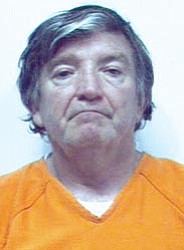 Deputies booked Michael Taylor, 61, into Camp Verde jail on charges of one count of sexual abuse and one count of luring a minor for sexual exploitation.

Taylor, a bus driver for the Cottonwood-Oak Creek School District, has been relieved of his duties pending outcome of the investigation, according to Dwight D'Evelyn, YCSO spokesman.

The alleged victim, an acquaintance of Taylor, told her mother that Taylor had sexually abused her, D'Evelyn said.

The girl's mother called the Sheriff's Office, and detectives interviewed the victim, who told them Taylor sexually molested her on Friday, Feb. 26, at the Sedona Golf Resort.

The victim had accompanied Taylor as he performed janitorial work there that night, D'Evelyn said. Only Taylor and the victim were inside the building when the incident allegedly occurred.

The victim said Taylor grabbed her arms, started talking about sexual matters with her, and began touching her with sexual intent, but she broke free and ran away, D'Evelyn said.

Detectives confirmed Taylor had previously molested the victim and attempted sex with her in October of 2009.

When detectives interviewed Taylor, he admitted to sexual physical contact with the victim, D'Evelyn said.