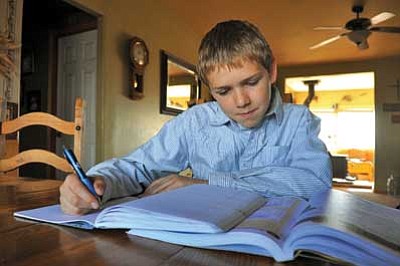 Ryan Rozendaal works on some schoolwork at his home in Prescott Valley Saturday afternoon. Rozendaal recently won a statewide poetry contest for home-schooled students and will read his poem during Home School Day at the state Capitol in Phoenix.<br> Photo courtesy of Matt Hinshaw/The Daily Courier

Ryan Rozendaal used 14 adjectives to describe the progression from slavery to freedom in a poem bearing those three words in its title.

The poem is shorter than the first paragraph of this story, and does not rhyme. It is called a diamanté because it takes up seven lines and is shaped like a diamond.

The poem apparently became a diamond in the rough in the poetry contest that the Arizona Families for Home Education (AFHE) sponsored recently for home-schooled students.

Ryan, the 12-year-old son of Ross and Kara Rozendaal of the Coyote Springs area north of Prescott Valley, placed first in his age division (9 to 13) in the statewide contest.

The contest came with a $50 cash prize, and Ryan is scheduled to read his poem Tuesday during Home School Day at the state Capitol in Phoenix.

Ryan was among 29 children who entered the contest, according to Nancy Manos, an AFHE board member. Four judges evaluated poems from children in three age divisions based on "content, relevance to the theme, creativity and poetic structure," she added.

AFHE's website states judges looked for poems in each age group that best exemplify six factors. They include caring about the subject matter, evoking responses from the reader, using language "in a fresh way" and maintaining a "consistent voice."

The website added poems "should not conflict with AFHE's mission to promote parent-led, family funded, relationship-based home education, not should they conflict with a Biblical worldview."

Ryan entered the poetry contest - his first - because he is studying freedom and the founding of the United States, his mother said. He is researching Benedict Arnold as part of his home schooling.

However, Ryan, a native of Prescott who formerly attended Coyote Springs Elementary School in Prescott Valley, said math is his favorite academic subject. He said he has not decided what he plans to study in college or how he plans to make a living.

Ryan lives with his family on a 10-acre spread with four dogs, two cats, two horses, six sheep and 40 chickens.