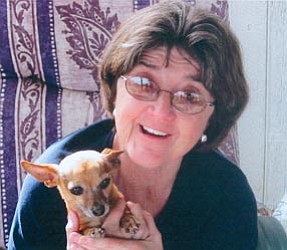 Brenda was an active member of St. Germaine's Catholic Church in Prescott Valley, and enjoyed socializing with all of the pilots' wives in her husband John's aviation club, the Chino Valley Model Aviators. She was employed by Good Samaritan Society of Prescott and Prescott Valley, whom she considered her second family. Brenda loved tending to her garden and camping with family. Brenda was most proud of her grandchildren.