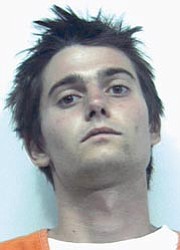 Prescott police arrested a man this past Friday on charges including possession of narcotics after he came out of the men's restroom at Mike's Mini Mart seeming confused, with fresh track marks on his arm and drug paraphernalia in his pockets.

Officers booked Travis Michael Jenkins, 21, of Glendale into the Yavapai County Jail in Camp Verde on charges of possession of narcotics, possession of drug paraphernalia, and theft of a credit card.

The clerk told the officer that the man locked himself inside the men's restroom for over 45 minutes and didn't respond when the clerk checked to see if he was all right. The clerk eventually called police.

The officer knocked on the door and found it locked, heard the toilet flush and the sink running.

When Jenkins walked out, he appeared to be heavily under the influence of a substance as he was hunched over, confused, and had red, bloodshot eyes, said Lt. Andy Reinhardt, spokesman for the Prescott Police Department.

The officer noticed Jenkins' left sleeve was rolled up and he had fresh track marks on that arm and asked if he needed medical attention, but Jenkins said he did not. The officer did a quick pat-down for weapons and found none, but did notice some smaller items in Jenkins' pockets.

Another officer spoke with Jenkins and found a syringe, a spoon with a black tarry substance, a shoelace, a lighter and a small bindle with a green, leafy substance.

After the officer took Jenkins back to the police station, she found a credit card that didn't belong to him in his wallet.

Jenkins said he hadn't tried to contact the owner or police about the credit card and had forgotten about it, Reinhardt said.

The black tarry substance on the spoon tested positive for heroin, according to police. Jenkins told the officer that the leafy substance was Spice.

"Spice is just another item that people have found to use to get high like marijuana," Reinhardt said.

"People don't realize that using some substances can be fatal," Reinhardt said. "The substances may not be illegal, but they can be harmful even on the first use."