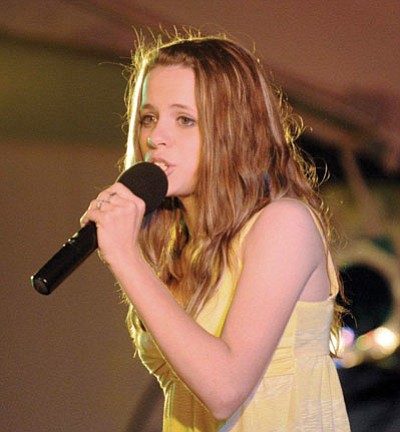 Belting out Leonard Cohen's "Hallelujah" Friday night in the preliminaries won Drew Ryniewicz a spot later in the evening as one of six finalists in the 2010 PV Idol competition.

Her rendition of "Put Your Records On" in the finals at the Prescott Valley Entertainment District sealed a first place finish for the 13-year-old Chino Valley resident.

"Oh, I'm forgettin' the words, though I'm singing my heart, but I don't remember what. Groovin', but it's a broken hallelujah."

"You've got such a unique style. Your range is awesome; your falsetto is awesome. You gave me goose bumps, and that doesn't usually happen," said PV Idol judge Mark Barry, musician and owner of Studio U Recording.

Drew said she picked the song the day before the competition and practiced all day.

"It was a song that I sort of knew. I did mess up the words and made up some words to go in there," she said with a laugh on Tuesday from her home in Chino Valley.

Drew's mother, Roberta Ryniewicz, said she noticed her daughter's singing ability about the time Drew was in second grade. The young girl has been a voice student at Academy of Performing Arts, and has studied with voice teacher Linda Sheehan. More recently, she's been involved with choir at Trinity Christian School.

"Well, Drew, I have to admit when they said they were sending a 13 year old to sing "Hallelujah," I went, 'It's time to leave,'" St. Clair told her during the critique portion of the preliminaries.

"It's a very, very tough song. And you sang it really, really beautifully - not just for a 13 year old. You sang it beautifully, period," she said.

"One, learn the lyrics. And even though your audience loves you, don't break character in the middle of the song. No thank you's," St. Clair added, referring to a swell of audience applause that led to Drew's response between verses.

"I'm 54 years old, and I've heard a fair amount of singers in my life. She brought tears to my eyes," Byers said. "She sang it impeccably. I told her I found her absolutely perfect from the second she opened her mouth to when she stopped singing."

Second place winner Ashli Carlson, winner of this past year's Idol contest, sang "Crazy" during the preliminary round and "Lord, I Hope this Day is Good" during the finals. Kristy Visel took third place with "Walking in Memphis," which she sang for both rounds. Judges looked for vocal talent and stage presence.

"Each year we've had an increase in competitors," said PV Chamber executive director Marnie Uhl. "The local talent in our community is just amazing."

Encouraged by the response of her listeners, Drew entered the Northern Arizona's Got Talent in Flagstaff yesterday evening, and will audition for Prescott's Karaoke Idol in July. After Friday's performance, Roberta Ryniewicz said strangers approached Drew and said they would love to buy her CD as soon as she records one.

"This is new to us. We are letting her make decisions on what she wants to do," Drew's mother said.

Recording songs is definitely in the future, and then they will search for an agent.

"I want to try to become famous. American Idol sounds fun. Even if I didn't get really far with it, I'd learn more stage presence and learn more about how to sing," Drew said