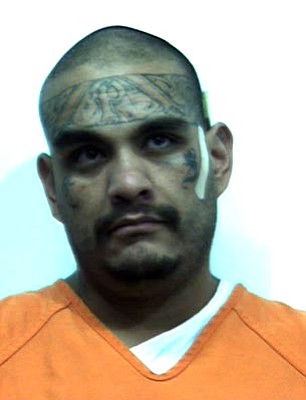 Prescott Valley police arrested a man early Thursday morning on charges including aggravated assault per domestic violence after he allegedly injured his girlfriend repeatedly while she drove him home and after they arrived at home.

The 26-year-old woman got to a neighbor's home in the 3800 block of Vickie Court and called police, said Sgt. Brandon Bonney, spokesman for the Prescott Valley Police Department.

When officers questioned the suspect, Angelito Z. Mendoza, 27, of Prescott Valley, he said his girlfriend assaulted him, but did not provide any other details, Bonney said.

The injured woman told officers that she and Mendoza had visited family in Prescott, and she gave Mendoza a ride home since he had been drinking heavily.

After they got in the truck, the victim told officers Mendoza struck her several times in the head, tried to kick the rear window out of her vehicle, and passed out in the back seat, Bonney said.

The victim told officers she left Mendoza asleep in the vehicle when she got home, but a short time later he kicked the front door down, yelled, entered the room where she was sleeping and hit her in the head and face.

The woman told officers she went into a bathroom and closed the door, but Mendoza opened the door a short time later with a knife in his hand, pushed her down over the toilet and bathtub injuring her further.

She left the house, but when she returned Mendoza pushed her down onto rocks in the front yard causing a leg injury, Bonney said.

She told officers Mendoza pulled her back into the house by her hair and hit her repeatedly.

The woman said Mendoza threw large flagstone pieces at her vehicle shattering the front window and also broke her phone.

The woman went to Yavapai Regional Medical Center, where she was treated for injuries to her head, face and body, Bonney said.