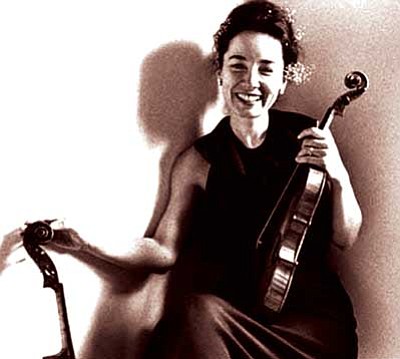 Rhines, a Prescott Valley resident and violinist, began lessons at the New England Conservatory of Music in Boston with her brother after he found an old violin in the attic, Rhines said. Everyone in her family played music when she was growing up, but she is the only one who turned professional.

During her undergraduate years at Northeastern University, Boston, she kept up with her music by studying with two concertmasters of the Boston Symphony Orchestra, Richard Burgin and Joseph Silverstein - "the best in the world" - while majoring in history and political science.

It was at Yale University's Graduate School of Music that she became a violin major.

Rhines describes on her website (marierhines.com) a chance encounter with Arlo Guthrie, which led roundabout to her "ethnomusicalogical" studies and research into the many different styles of fiddling.

"I've met a lot (of fiddlers) and played with a lot along the way," she said, citing her travels and studies in the Shetland Highlands of Scotland, Canada, Appalachian Mountains, the American West and Cajun country.

In addition to performing in concerts, Rhines plays for private parties and weddings; gives lessons on violin, viola, cello, mandolin and piano; and continues to compose.

"Not many violinists have composed, except (Niccolò) Paganini," she said.

A winner of 22 awards for her compositions, including a "massive undertaking" - an hour-long piece for symphony and operatic chorus commissioned by the state of Tennessee - Rhines specializes in Americana fiddle tunes and will have several CDs available at the concert.

She said both adults and children come to her studio for lessons. The adults are either committed to learning or they don't come back.

"But you never know with kids," she said. Some parents force their children to take lessons whether the youngsters want to learn or not, which wastes both their time and Rhines'.

"I take students who are highly motivated and who want to learn," she said, adding that she teaches both classical violin and fiddling.

"If you learn how to play the instrument, you can play anything on it. There's a lot of technique and studious work that goes into playing in tune. And a lot of discipline."

Sue Tone is a reporter for the Prescott Valley Tribune.